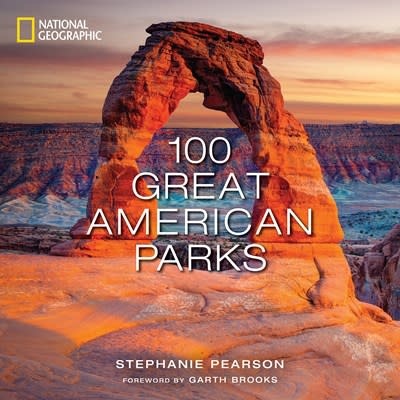 Nowhere in the world is there a park system like America’s. The National Park System was the first in the world and is a collection of the country’s best national treasures. For Americans, these places are part of our cultural DNA. Filled with beautiful National Geographic photography, wisdom from experts, need-to-know travel information including the best scenic overlooks and hiking trails, and practical wildlife-spotting tips, this inspirational collection takes readers to all 63 national parks, as well as 37 state, recreational, and city parks and green spaces.

With a park in every state, this beautiful collection highlights the top experiences in stunning destinations from Yosemite and Sequoia to Biscayne and Mammoth Cave. You'll discover the beauty, diversity, surprises, and wonder of each park, including

The mountain peaks of the Tetons Hawaii’s constantly erupting volcanoesThe crystal-clad underworld of Carlsbad Caverns The steamy swamps and mangrove forests of the deep SouthHidden gems tucked in bustling cities like New York’s Central ParkAnd so much more!Each entry in this magnificent volume explores the breathtaking landscapes, remarkable histories, extraordinary wildlife, and the need to conserve and explore each destination. With a foreword from legendary recording artist Garth Brooks, “the voice of America,” this innovative guide will lead you to experience the greatest park experiences the world has to offer and an understanding of these natural open spaces.

Author Bio: STEPHANIE PEARSON writes about travel, culture, the environment, people, and cutting-edge gear. Her assignments have included reporting from Mount Everest, meditating with Tibetan Buddhist scholar Bob Thurman in Bhutan, and producing an online science curriculum while traveling through Australia and Latin America with National Geographic Fellow Dan Buettner and his team. After receiving her degree from Northwestern University’s Medill School of Journalism, Pearson began her career at Outside magazine, where she was editorial staff for more than a decade and is currently a contributing editor. Her work has appeared in the New York Times Magazine, National Geographic Traveler, Bicycling, Wired, CNN, O, the Oprah Magazine, Men’s Journal, Travel + Leisure, Lonely Planet, and others. She has also been anthologized in The Best American Travel Writing and Out There: The Wildest Stories from Outside Magazine.

GARTH BROOKS (foreword) first learned to play guitar and banjo while growing up in rural Oklahoma. He went on to become one of the world’s best-selling artists of all time, second only to the Beatles in album sales in the U.S. He was inducted into the Country Music Hall of Fame in 2012 and has made the Billboard Hot Country Songs chart every decade since the '80s. His music has been intertwined with the American landscape, with album titles such as “No Fences,” “The River,” and “The Thunder Rolls” that hint at Brooks's deep connection to America’s wild and open spaces, which inspire his songwriting. Brooks narrates National Geographic’s National Parks, premiering September 2022.