Home » A Ben of All Trades: The Most Inventive Boyhood of Benjamin Franklin 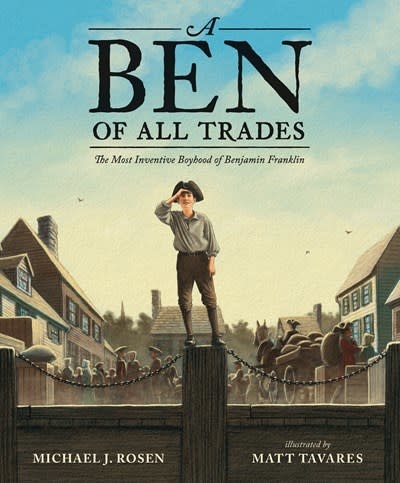 A Ben of All Trades: The Most Inventive Boyhood of Benjamin Franklin

Young Benjamin Franklin wants to be a sailor, but his father won’t hear of it. The other trades he tries — candle maker, joiner, boot closer, turner — bore him through and through. Curious and inventive, Ben prefers to read, swim, fly his kite, and fly his kite while swimming. But each time he fails to find a profession, he takes some important bit of knowledge with him. That tendency is exactly what leads him to become the astonishingly versatile genius we remember today. Inspired by The Autobiography of Benjamin Franklin, Michael J. Rosen’s wry tale captures Ben’s spirit in evocative yet playful language, while illustrations by Matt Tavares follow Ben from the workbench to the water in vivid detail. A love story to the value of variety, A Ben of All Trades sheds light on an unconventional path to greatness and humanizes a towering figure in American history.