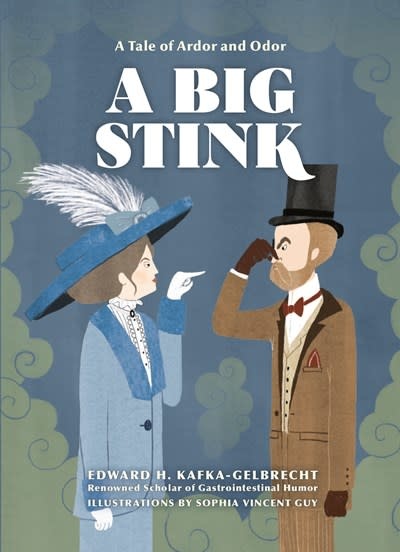 A delightfully illustrated story about passing gas and passing the buck, by a renowned scholar of gastrointestinal humor who has seen and smelled it all.

The marriage of fart humor and wordplay is a potent source of pleasure probably as old as language itself. So says Edward H. Kafka-Gelbrecht, who has spent a lifetime studying the art of the unclaimed fart, from the courtroom to the convent. Now, in this illustrated tour de force, he airs a more personal story about a quiet elevator ride that is suddenly shattered by a not-so-noble gas. Starting with the classic “He who smelt it, dealt it” and the indignant riposte “She who denied it, supplied it,” the repartee heats up as the elevator rises. Can a reek that drives people apart instead bring two strangers together?

A Big Stink’s beguiling blend of highbrow and lowbrow humor will delight oversharing families and word lovers alike. Illustrator Sophia Vincent Guy ramps up the fun with elegantly detailed illustrations sprinkled with Easter eggs. Sure to reduce even the most solemn adults to irrepressible giggles, A Big Stink is a ripping good read and a breath of foul air.

Edward H. Kafka-Gelbrecht is a leading scholar of gastrointestinal humor. His celebrated study “Layman’s Terms: Dropping Knowledge” traces the use of the phrase “stink egg” among New England retail sales associates in the late 1970s. He lives with a parrot, Péter.

Sophia Vincent Guy--if that is indeed her real name--is an architect turned illustrator, widely recognized as an expert visual interpreter of Edwardian comportment. In her Mediterranean studio, she transforms olfactory ambiance into visual motifs for audiences of all ages.