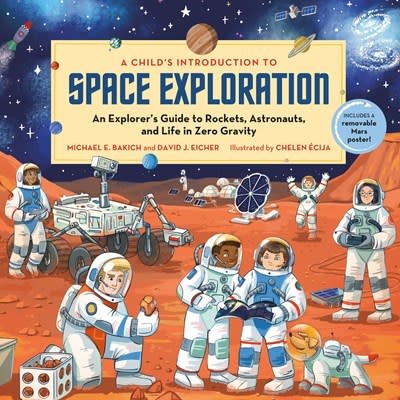 A Child's Introduction to Space Exploration

Get ready to blast off into the space! This interactive, fact-filled book by two space experts takes kids aged 8-12 on a journey through the universe with answers to all their questions on space exploration--from what the first rockets looked like and the first animal in space to what space food tastes like and what it’s like to live in zero gravity.

We are living in a golden age of astronomy and space exploration, with more discoveries about the universe every day. With so many possibilities now open to us, revered science writers Michael E. Bakich and David J. Eicher will take young readers on a journey to the throughout the universe in this latest edition of A Child’s Introduction series.

Perfect for budding explorers aged 8-12, Bakich and Eicher explore the history of space exploration from the very first rocket in China, to the moon landing, to the latest missions to Mars (and beyond). They also include profiles of noteworthy scientists, engineers, and astronauts including Isaac Newton, Neil Armstrong, Mae Carol Jemison; fun sections on space food, UFOs, a timeline of space suits, and how to go to the bathroom in space; and STEM experiments like how to build your own rocket and how to tell time using the sun.

Packed with dozens of NASA photos and charming original illustrations, and a pull-out poster, this fascinating book reveals the wonders of space exploration—past, present and future!

Michael E. Bakich is Contributing Editor of Astronomy Magazine. He graduated with a B.S. in astronomy from the Ohio State University, and an M.A. in planetarium education (one of only six such degrees ever awarded) from Michigan State University. He is a popular lecturer and has given many print, online, radio, and TV interviews, and wrote, blogged, and starred in videos for Astronomy Magazine’s popular website, Astronomy.com. In 2007, the International Astronomical Union’s Minor Planet Center designated asteroid 131245 “Bakich” in his honor. He lives in Tucson, Arizona.

David J. Eicher is Editor-in-Chief of Astronomy Magazine, which he’s led for 18 years. He has author, coauthor, or editor of 25 on science and history, including The New Cosmos: Answering Astronomy’s Big Questions, and most recently in 2020, published Galaxies: Inside the Universe’s Star Cities and Cosmic Clouds 3-D with coauthor Brian May. Eicher is Editor-in-Chief of the Asteroid Day project, and has written film scripts for NASA and planetarium shows for Adler Planetarium. In 1990, the International Astronomical Union named the minor planet 3617 “Eicher” in his honor. He lives in Waukesha Township, Wisconsin.

Chelen Ecija is an illustrator and letterer based in sunny Spain. She loves to travel, eat sunflower seeds, and buy new books. She studied Fine Arts in Madrid and Chicago, where she attended The School of the Art Institute and she was an art director in a boutique toy company for a while while living in the USA. Now she is back in Europe, working as a freelance illustrator where she has specialized in her true passion: hand lettering and children's illustration.