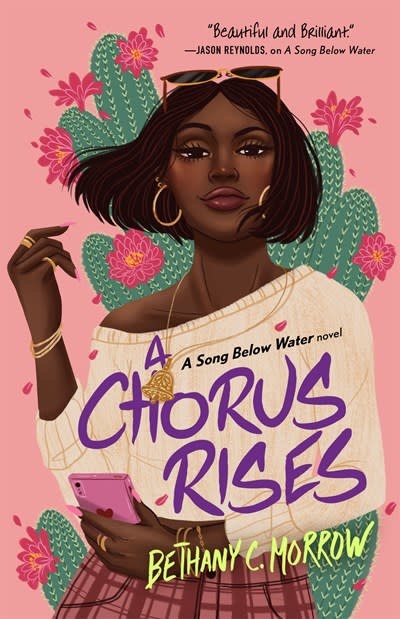 Meet Naema Bradshaw: a beautiful Eloko, once Portland-famous, now infamous, as she navigates a personal and public reckoning where confronting the limits of her privilege will show Naema what her magic really is, and who it makes her.

Teen influencer Naema Bradshaw has it all: she’s famous, stylish, gorgeous?and she’s an Eloko, a charismatic person gifted with a melody that people adore. Everyone loves her? until she's cast as the villain who exposed a Siren to the whole world.

Dragged by the media, and canceled by her fans, no one understands her side: not her boyfriend, not her friends, not even her fellow Eloko. Villified by those closest to her, Naema heads to the Southwest where she is determined to stage a comeback... to her family, her real self, and the truth about her magic. What she finds is a new community in a flourishing group of online fans who support her.

At first, it feels like it used to - the fandom, the adoration, the community that takes her side - but when her online advocates start targeting other Black girls, Naema will realize that - for Black girls like her - even the privilege of fame has its limits. And only Naema can discover the true purpose of her power, and how to use it.

A Chorus Rises is a timely confrontation of the evolving nature of popularity in a society that chooses "exceptions" and rewards "model minorities."

“A watery and melodic crossroads of the real and the mythic, A Song Below Water lures readers with its seductive and beautifully Black siren song. An enthralling tale of Black girl magic and searing social commentary ready to rattle the bones.” —DHONIELLE CLAYTON, New York Times bestselling author of The Belles series

Bethany C. Morrow is a recovering expat recently returning from six years in Montreal, Quebec, to live and write in north country New York. A California native, Bethany graduated from the University of California, Santa Cruz with a BA in Sociology. Following undergrad, she studied Clinical Psychological Research at the University of Wales, Bangor, in Great Britain before returning to North America to focus on her literary work. She is the author of the adult novel Mem (Unnamed Press) and the editor of the young adult anthology Take the Mic (Arthur A. Levine Books).