Home » A Disaster in Three Acts 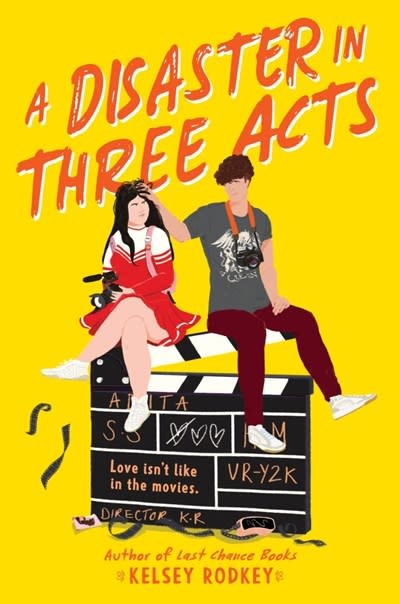 A Disaster in Three Acts

Fans of Elise Bryant and Rachel Lynn Solomon will devour the next irresistible love/hate YA rom-com from Kelsey Rodkey, starring two reluctant ex-friends who must film a documentary together—without catching their true feelings on tape.

Saine Sinclair knows a little something about what makes a story worth telling.Your childhood best friend refuses to kiss you during a preadolescent game of spin the bottle? Terrible, zero stars, would not replay that scene again. The same ex-friend becomes your new best friend’s ex? Strangely compelling, unexpected twist, worth a hate-watch. That same guy—why is he always around?—turns out to be your last shot at getting into the documentary filmmaking program of your dreams.Saine hates to admit it, but she’d watch that movie.There’s something about Holden that makes her feel like she’s the one in front of the camera—like he can see every uncomfortable truth she’s buried below the surface. Saine knows how her story’s supposed to go. So why does every moment with Holden seem intent on changing the ending?Rom-com lovers will swoon for Kelsey Rodkey’s next reluctant romance, packed with snark, banter, and inconvenient crushes.