Home » Donut Dreams: A Donut for Your Thoughts 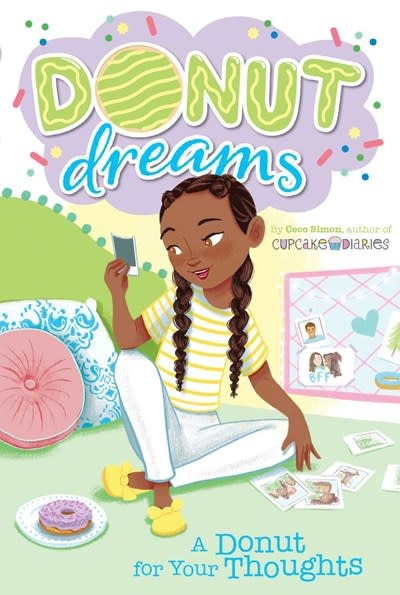 Donut Dreams: A Donut for Your Thoughts

Casey adjusts to unexpected changes in the fourth delicious book in the Donut Dreams series from the author of the Cupcake Diaries and Sprinkle Sundays series!

Everything’s better with a donut.

Casey thought that coming back from sleepaway camp would mean picking up right where she left off. But when she gets home, it seems like everyone has changed at least a little bit—even her BFF Lindsay. Not only that, she made a new friend at camp, a boy named Matt. Casey can’t decide for sure if she likes him as a friend, or if she like-likes him. And Casey’s middle school has a tough assistant principal…her mom! With so many changes stirring things up, will Casey find herself in a sticky situation?

From cupcakes to ice cream and donuts! Having written over thirty books about middle school girls and cupcakes and ice cream, Coco Simon decided it was time for a change; so she’s switched her focus to her third favorite sweet treat: donuts! When she’s not daydreaming about yummy snacks, Coco edits children’s books and has written close to one hundred books for children, tweens, and young adults, which is a lot less than the number of cupcakes, ice cream cones, and donuts she’s eaten. She is the author of the Cupcake Diaries, the Sprinkle Sundays, and the Donut Dreams series.