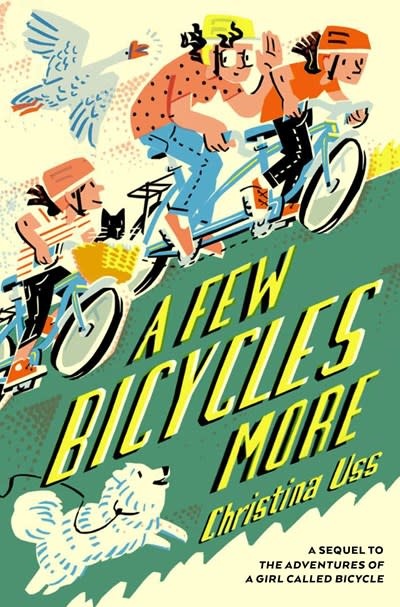 In the sequel to the popular Adventures of a Girl Called Bicycle, our hero reunites with her long-lost family and attempts a daring vehicular rescue.

A Few Bicycles More is the exciting sequel to Christina Uss’s Adventures of a Girl Called Bicycle. Bicycle has been back from her cross-country adventure with her robot-like bike, named Fortune, for just a month when it starts malfunctioning, insisting that they pedal away from their home in Washington D.C. to Harpers Ferry in West Virginia. Once there, they discover a scrapyard where bicycles are being crushed and recycled—and it appears they are too late to save them.

Bicycle and Fortune head to a convenience store so Bicycle can drown her sorrows with a chocolate bar.  Much to her astonishment, she meets her long-lost family there. Bicycle learns that they have been looking for her since she disappeared as a toddler and that she is a quintuplet. She is happy to go live with them except for one thing: her family doesn’t share her passion for cycling. In fact, her sisters have never even ridden a bike.

Then Fortune acts up again, leading Bicycle back to the scrapyard where she discovers that there are four bicycles left and they were all made by the same inventor who created her Fortune. Four seems too coincidental to ignore--the perfect number to bring her sisters up to speed. She sets a plan in motion to rescue the bikes, a plan that if it works will help her fit into her family and still stay true to cycling self.