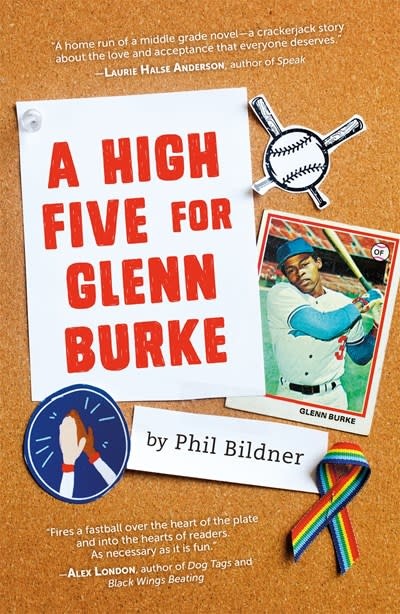 A High Five for Glenn Burke

A heartfelt and relatable novel from Phil Bildner, weaving the real history of Los Angeles Dodger and Oakland Athletic Glenn Burke--the first professional baseball player to come out as gay--into the story of a middle-school kid learning to be himself.

When sixth grader Silas Wade does a school presentation on former Major Leaguer Glenn Burke, it’s more than just a report about the irrepressible inventor of the high five. Burke was a gay baseball player in the 1970s—and for Silas, the presentation is his own first baby step toward revealing a truth about himself he's tired of hiding. Soon he tells his best friend, Zoey, but the longer he keeps his secret from his baseball teammates, the more he suspects they know something’s up—especially when he stages one big cover-up with terrible consequences.
A High Five for Glenn Burke is Phil Bildner’s most personal novel yet—a powerful story about the challenge of being true to yourself, especially when not everyone feels you belong on the field.