Home » A History of Underwear with Professor Chicken 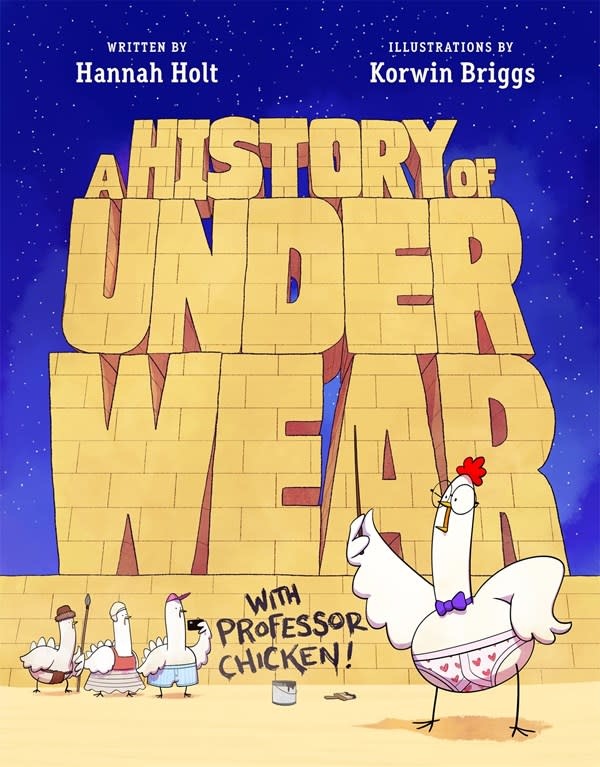 A History of Underwear with Professor Chicken

A very serious, comprehensive nonfiction picture book about the complicated history of underwear . . . with chickens.

From Paleolithic loincloths to Henry VIII's wives wearing underwear on their heads to Mary Walker, a civil war surgeon who was arrested for wearing men's underwear and clothing to better work on patients, this book surveys the vast and fascinating history of our most private clothing.

Modeled by chickens, the history of underwear is traced from the very first discovery–a paleolithic nomad whose body was found completely preserved in ice. From there, we look across time and culture in this completely accessible, new take on boring old nonfiction picture books.

Packed with information, hilariously but accurately (well . . . except for the chickens) illustrated, A History of Underwear with Professor Chicken is sure to wedge its way into the annals of history-based picture books.

Hannah Holt is a children's author with an engineering degree. Her books, The Diamond & The Boy (Balzer+Bray) and A Father's Love (Philomel) weave together her love of language and science. She lives in Oregon with her husband, four children, and a very patient cat named Zephyr.

Korwin Briggs is an author and illustrator who makes comics, infographics, and books about academic stuff like history and science. And chickens wearing underwear.