Home » A Knight of the Seven Kingdoms 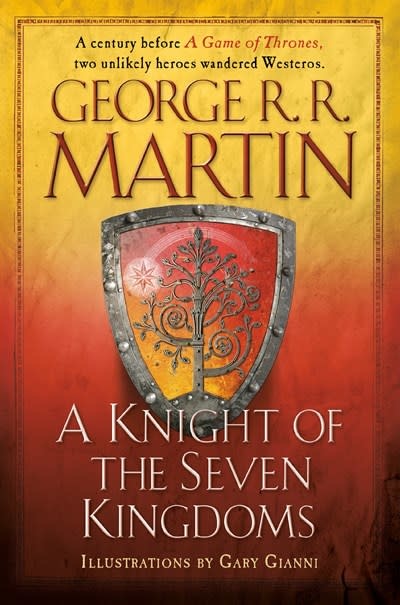 A Knight of the Seven Kingdoms

Taking place nearly a century before the events of A Game of Thrones, A Knight of the Seven Kingdoms compiles the three official prequel novellas to George R. R. Martin’s ongoing masterwork, A Song of Ice and Fire.

These collected adventures recount an age when the Targaryen line still holds the Iron Throne, and the memory of the last dragon has not yet passed from living consciousness. Before Tyrion Lannister and Podrick Payne, there was Dunk and Egg. A young, naïve but ultimately courageous hedge knight, Ser Duncan the Tall towers above his rivals—in stature if not experience. Tagging along is his diminutive squire, a boy called Egg—whose true name is hidden from all he and Dunk encounter. Though more improbable heroes may not be found in all of Westeros, great destinies lay ahead for these two…as do powerful foes, royal intrigue, and outrageous exploits.

Featuring more than 160 illustrations that artist Gary Gianni created specifically for this book, A Knight of the Seven Kingdoms is a must-have collection that proves chivalry isn’t dead—yet.

Story Locale: Westeros 90 years before A Game of Thrones

George R. R. Martin is the #1 New York Times bestselling author of many novels, including those of the acclaimed series A Song of Ice and Fire—A Game of Thrones, A Clash of Kings, A Storm of Swords, A Feast for Crows, and A Dance with Dragons—as well as related works such as Fire & Blood, A Knight of the Seven Kingdoms, and The World of Ice & Fire, with Elio M. García, Jr., and Linda Antonsson. Other novels include Tuf Voyaging, Fevre Dream, The Armageddon Rag, Dying of the Light, Windhaven (with Lisa Tuttle), and Dreamsongs Volumes I and II. As a writer-producer, he has worked on The Twilight Zone, Beauty and the Beast, and various feature films and pilots that were never made. He lives with his lovely wife, Parris, in Santa Fe, New Mexico.

Gary Gianni has illustrated several works of George R. R. Martin as well as other authors ranging from Jules Verne and H. P. Lovecraft to Ray Bradbury and Michael Chabon. As a comic book artist, he has drawn Batman, Indiana Jones, Hellboy, The Shadow, and MonsterMen. He also worked on the syndicated comic strip Prince Valiant from 2003 to 2012.