Home » A Line in the Dark 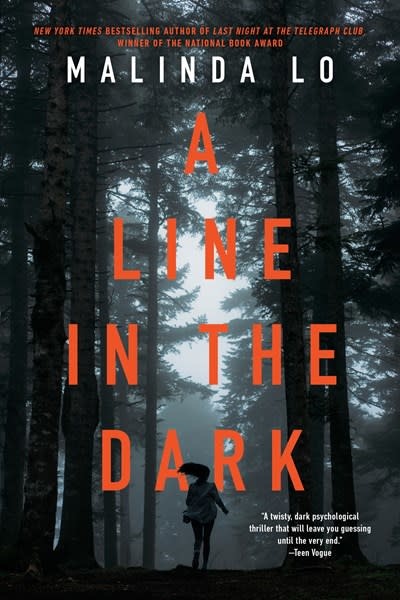 A Line in the Dark

Poised to be discovered by a fresh generation of readers, Malinda Lo’s twisty queer thriller, A Line in the Dark returns to the shelf with a striking new look.

Bestselling author and National Book Award winner Malinda Lo’s A Line in the Dark, was celebrated by critics, who praised it as “riveting” and “an increasingly complex web of secrets, lies, and murder.” In the wake of the huge success of Lo’s Last Night at the Telegraph Club, A Line in the Dark will be reissued in paperback just in time for the publication of her brand new novel. With a striking look perfect for the contemporary bookshelf, this twisty mystery will delight both thriller readers and Malinda Lo’s growing legions of fans.

When Jess Wong's best friend starts falling for Margot, a girl from the nearby boarding school, Jess can already see what’s going to happen. She's always known Angie better than Angie knows herself. As Angie drags Jess further into Margot’s circle, Jess ﬁnds more than her friend’s growing crush. Secrets lie beneath the carefree surface of this wealthy world, Jess knows Angie won’t be able to handle the consequences. When the inevitable darkness descends, Angie will need Jess to be more than a friend.

Malinda Lo is the New York Times bestselling author of Last Night at the Telegraph Club, winner of the National Book Award, the Stonewall Book Award, and the Asian/Pacific American Award for Literature, as well as Michael L. Printz and Walter Dean Myers honors. Her debut novel Ash, a Sapphic retelling of Cinderella, was a finalist for the William C. Morris YA Debut Award, the Andre Norton Award for YA Science Fiction and Fantasy, the Mythopoeic Fantasy Award, and the Lambda Literary Award. Malinda’s short fiction and nonfiction has been published by The New York Times, NPR, Autostraddle, The Horn Book, and multiple anthologies. She lives in Massachusetts with her wife and their dog.