Home » A Man of the World: My Life at National Geographic [Memoir] 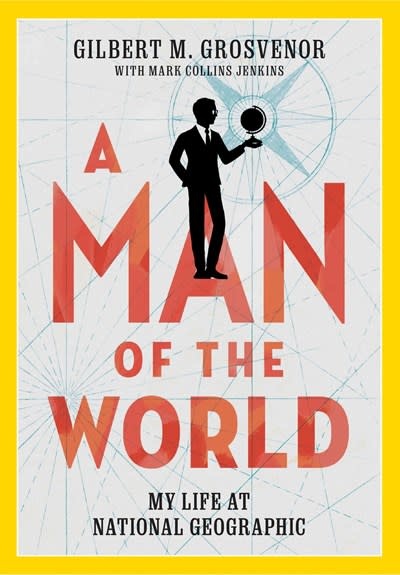 A Man of the World: My Life at National Geographic [Memoir]

The captivating inside story of the man who helmed National Geographic for six decades is a front-row seat to audacious feats of exploration, from the successful hunt for the Titanic to Jane Goodall's field studies. Offering a rare portrait of one of the world's most iconic media empires, this revealing autobiography makes an impassioned argument to know—and care for—our planet.

Though his career path had been paved by four generations of his family before him, Gilbert M. Grosvenor left his own mark on the National Geographic Society, founded in 1888 and recognized the world over by its ubiquitous yellow border. In an unflinchingly honest memoir as big as the world and all that is in it, Grosvenor shows us what it was like to "grow up Geographic" in a family home where explorers like Robert Peary, Louis Leakey, and Jane Goodall regularly crossed the threshold. As staff photographer, editor in chief and then president of the organization, Grosvenor oversaw the diversification into television, film, books, as well as its flagship magazine, which under his tenure reached a peak circulation of nearly 11 million. He also narrates the shift from a nonprofit, family-focused enterprise to the more corporate, bottom-line focused world of publishing today.

For Grosvenor, running National Geographic wasn’t just a job. It was a legacy, motivated by a passion not just to leave the world a better place, but to motivate others to do so, too. Filled with world travel, charismatic explorers, and the complexities of running a publishing empire, A MAN OF THE WORLD is the story of one man, a singular family business, and the changing face of American media.

Author Bio: Gilbert Melville Grosvenor is the former president and chairman of the National Geographic Society, after having served as the editor of National Geographic magazine from 1970 to 1980. The great-grandson of Alexander Graham Bell and the third Grosvenor to serve as editor-in-chief of the magazine, Grosvenor has received 14 honorary doctorates and the Presidential Medal of Freedom in 2005 for his leadership in geography education.