Home » A Mouthful of Minnows 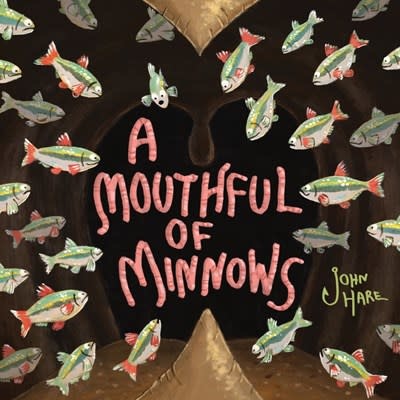 A Mouthful of Minnows

A fishing story like no other! Alphonso the snapping turtle can’t wait for breakfast. But what if his breakfast is too likable to eat? A Mouthful of Minnows is a humorous picture book about patience, generosity, friendship, and empathy (as well as the awesome mysteries of nature!) that will lure in fans of Ryan T. Higgins’s We Don’t Eat Our Classmates and Peter Brown’s You Will Be My Friend!

At the bottom of the pond, Alphonso the snapping turtle opens his mouth wide, wiggles his worm-like tongue, and waits patiently for breakfast. He barely notices a measly minnow, but he’s thrilled when the entire school shows up. Alphonso’s perseverance has paid off! But when a whole family arrives to celebrate together, Alphonso’s true character emerges, and he has second thoughts about the breakfast he’s been waiting for.Acclaimed author-artist John Hare’s artwork is textured, playful, and energetic, bringing the depths of the underwater setting to life. A Mouthful of Minnows is a surprising and heartwarming picture book that is a great choice for story time and bedtime.Includes backmatter about alligator snapping turtles.

John Hare spent his youth in Kansas drawing comic strips about snakes, making spoof yearbooks to entertain his friends, and writing stories about a crime-fighting crocodile. He earned a degree in graphic design and got a job as a production artist at a sportswear company. Later, he moved to Kansas City and worked as a freelance graphic designer. One day, he picked up a brush and painted a scene for his son's nursery. That's when he realized he still wanted nothing more than to bring stories to life. John Hare now lives in Gladstone, Missouri, where he is fortunate to work from his home studio. He is the author of the acclaimed Field Trip to the Moon and Field Trip to the Ocean Deep.