Home » A Parliament of Owls 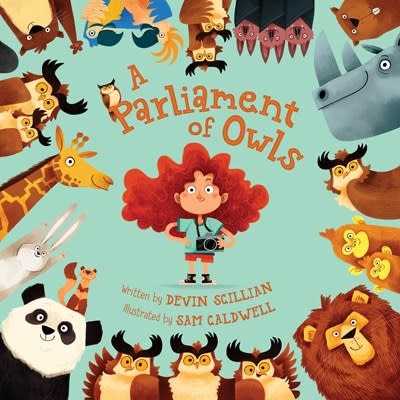 A Parliament of Owls

From a mischief of mice and a shiver of sharks to a caravan of camels and a rhumba of rattlesnakes, animals from around the globe gather a group and sashay, swim, slither, or sail through this party of animal plurals. The only question is "What to call this animal arcade? This critter convention? This zigzag zoo? This purring and preening parade?" A delightful and colorful romp through the perfection of animal plurals from the author of Memoirs of a Goldfish!

Devin Scillian is an award-winning broadcast journalist whose children's books include Memoirs of a Goldfish. He anchors the news for WDIV-TV in Detroit.

Sam Caldwell grew up in the northwest of England and studied painting at the Edinburgh College of Art. He is a children's illustrator based in Glasgow.