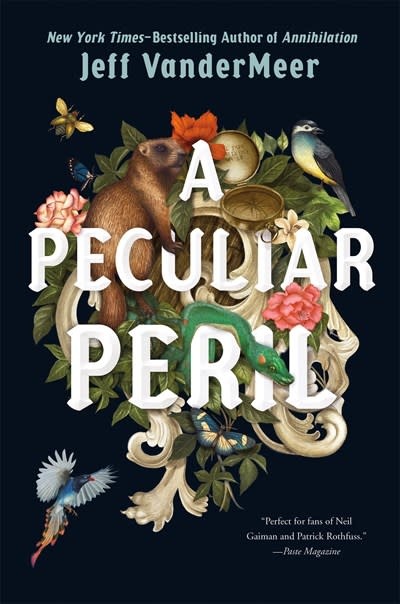 The first book in a new YA fantasy duology from a bestselling genre-expanding master, about a teenager who embarks on a quest to protect the world from an alternate universe where magic abounds and history has been rewritten.

After Jonathan Lambshead’s elusive grandfather dies, the recently orphaned teenager inherits the family mansion—and its contents. Jonathan soon discovers that the mansion’s basement holds more than just oddities: three doors serve as portals, with one leading to an alt-Earth called Aurora, where magic abounds, history has been re-written, and an occult dictator called Aleister Crowley leads an army pillaging alt-Europe. Jonathan learns of his destiny as a member of The Order, a secret society devoted to keeping our world separate from Aurora, and embarks on an epic quest to protect Earth from Crowley’s dark magic.

Over the course of the duology, Jonathan uncovers more of the worlds outside of our own, the magic that permeates them, his own destiny, and the secrets buried in his family history.

This is book 1 in the Misadventures of Jonathan Lambshead duology, with book 2 publishing in Spring 2021.

Jeff VanderMeer’s New York Times-bestselling Southern Reach trilogy has been translated into over thirty-five languages. The first novel, Annihilation, won the Nebula Award and Shirley Jackson Award, was shortlisted for a half dozen more, and has been made into a movie. His novel Borne has received wide critical acclaim, including a rare trifecta of rave reviews from the New York Times, Los Angeles Times, and the Washington Post, and has been optioned by Paramount. The New Yorker has called Jeff “the weird Thoreau” and he frequently speaks about issues related to climate change and storytelling. He lives in Tallahassee, Florida. jeffvandermeer.com