Home » A Quick History of Money 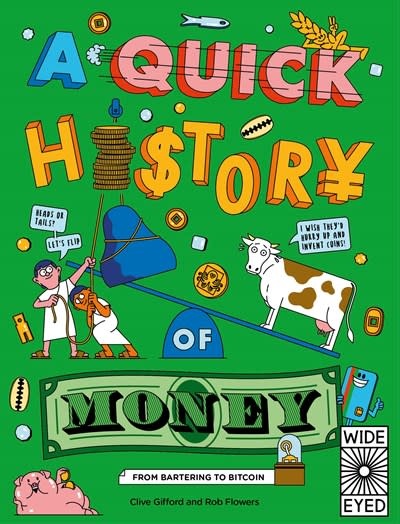 A Quick History of Money

A Quick History of Money takes us from barter to Bitcoin, packed with facts and jokes about how and why money works… and sometimes doesn’t.

Why is a $5 note worth $5? Where do coins come from? What do banks actually do? All this and so much more is answered in A Quick History of Money, a crash course from cash cows to cryptocurrency.

Money might sound all grown-up and serious, but the history of buying, selling, saving, and stealing is full of crazy stories and unbelievable facts. A Quick History of Money is here to show you the silly side, as well as give you the lowdown on the important stuff like interest, stocks and shares, and wealth inequality.

You will discover:How the earliest societies got by without a penny in their pockets.Why gold gets all the glory.How the first banks started making money from money.Who invented the first banknotes and the concept of ‘fiat’ money.The craziest money-making cons of all time, from shaving coins to selling the Eiffel Tower… twice.How wealth is measured in the modern-day.History’s most expensive money mistakes.What money might look like in the future.Great tips for slick saving and smart spending.Plus, read about the world’s weirdest wonga, from the four-tonne stones used as currency on the island of Yap, to teacups and sea shells in ancient Asia, to beaver pelts in colonial Canada. Learn how hyperinflation leads to some mind-blowing money math, like the Bitcoins used to buy two pizzas in 2010 that would be worth over $90 million today. Test your knowhow with a quiz at the back of the book.

Packed with facts and jokes, the latest in the Quick Histories series takes us on a chronological tour from cashless societies to… cashless societies, proving that while it might make the world go round, money sure is funny.

Clive Gifford has traveled to more than 70 countries, climbed rocket launch towers, ridden on robots, and flown gliders. He's had more than 200 books published and has received nominations for or won Royal Society, School Library Association, Smithsonian, and TES awards. He won the Blue Peter Book Award for Best Book with Facts 2019 for his title The Colors of History (QEB). Clive lives in Manchester, UK. Rob Flowers channels his love for ghoulish characters, psychedelic colours, and anthropomorphic food into his bright and brilliant work. To the backdrop of a hoard of vintage action figures and Happy Meal toys, he creates his illustrations that embody this obvious love for humour and characters. His books for Wide Eyed Editions include A Quick History of the Universe and A Quick History of Money.