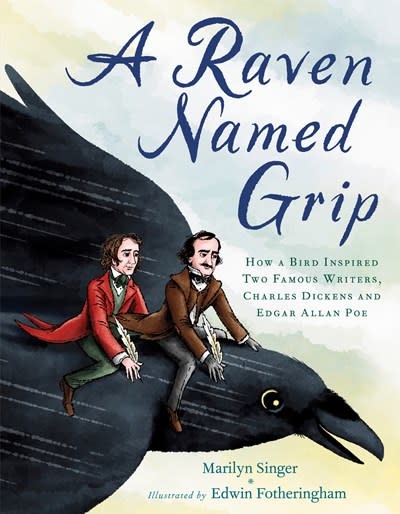 The endearing true story of how a love of birds connected and inspired two literary giants—Charles Dickens and Edgar Allan Poe.

From England to the United States and back again, this is the true and fascinating story of how a brilliant bird captured two famous authors’ hearts, inspired their writing, and formed an unexpected bond between them. This ingenious slice of history, biography, and even ornithology celebrates the fact that creative inspiration can be found everywhere.

Marilyn Singer is the award-winning author of more than 100 children’s books, including the much-honored Mirror Mirror and two other books of reverso poetry, as well as Follow the Recipe and Feel the Beat! Recipient of the 2015 NCTE Excellence in Poetry for Children Award, Marilyn, along with her husband, a standard poodle, cat, and two doves, divides her time between Brooklyn, New York, and Litchfield County, Connecticut, where she delights in watching birds, including ravens.

Edwin Fotheringham grew up in Australia, and attended the University of Washington School of Art in Seattle, where he currently lives with his family. The illustrator of several picture books, including the Robert F. Sibert Honor winner What to Do About Alice?, he has also worked on projects as diverse as record covers, department store ads, and illustrations for magazines and newspapers.