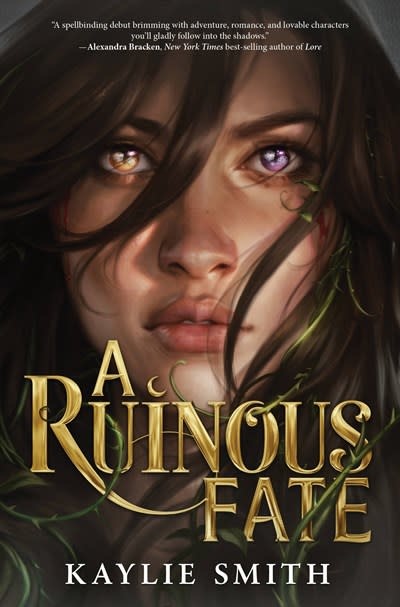 Catalog Copy: Fate does not choose the weak. Fate chooses the ready.

Calliope Rosewood is a witch with a long streak of bad luck. Like all witches in Illustros, her fate is directly tied to Witch’s Dice—powerful artifacts that have blessed her kind with limitless magic but also set them on a path toward destruction. Cursed with unspeakable powers that terrify even the most dangerous witches and fae, Calla deserted her coven four years ago and has been in hiding with her two best friends since. But Calla is also hiding a grave secret: She is only three Rolls away from becoming the last Blood Warrior and starting the Fates' War that will decimate her people and eradicate their magic.

After a betrayal from her ex leads her one step closer to fulfilling that age-old prophecy, Calla is desperate to do whatever it takes to reset her fate . . . even if that means journeying into the deadly Neverending Forest with said ex and his enigmatic older brother to find the one being who can help her forge her own path. As Calla ventures farther into the enchanted woods, she finds her heart torn between her past desires and alluring new possibilities. But she soon learns that choosing your own destiny may come with dire consequences.

Featuring a charming ensemble cast of characters, this first book in a planned series by debut author Kaylie Smith will sweep readers away with its utterly immersive world building, swoon-worthy romance, and action-packed storytelling.

Author Bio: Kaylie Smith is a writer and lover of all things fantasy. She grew up in Louisiana where she frequently haunted bookstores and practiced her craft. After college she decided to pursue her life-long dream of becoming an author, but when she isn’t writing or reading, she can be found at home with her menagerie of animals, fussing over her houseplants, or annoying people about astrology.