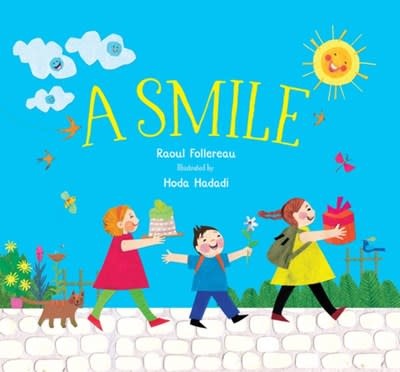 The power of a smile transforms lives in a modern translation of the classic poem by a beloved humanitarianA smile costs nothing, but it's worth so much. Did you ever think about the power of a smile? With one short poem, French writer and humanitarian Raoul Follereau spoke to the world about the value of this fundamentally human expression. Since 1920 "A Smile" has been translated into many languages around the world. In this new English translation, framed for a small child's point of view, the poignant words accompany an intergenerational story in pictures about two children and the many lives affected by their infectious smiles. A dejected street musician, A lonely businessman, an exhausted teacher—all are lifted up by the generosity, compassion, and friendship inspired by a simple smile. Created in paper collage by internationally award-winning illustrator Hoda Hadadi, the illustrations burst with joyful emotions that will infect the hearts of every reader.Although Raoul Follereau passed away in 1977, his belief in the ability of children to change the world shines through in this book, which was created thanks to the assistance of La Fondation Raoul Follereau. A closing note shares details about Follereau's humanitarian work, his thirty years traveling the world to give aid to and raise awareness for people with leprosy, and his creation of World Leprosy Day, which is still marked on the last Sunday in January every year.

Raoul Follereau (1903-1977) was a French writer and humanitarian. He established World Leprosy Day (the last Sunday in January each year) and worked tirelessly for the dignity of the poor and marginalized. In France, his name is found on schools, streets, and squares. Today, in seventeen countries, you can find associations that bear the name 'Raoul Follereau' and continue his work. His ever-popular poem 'A Smile' has been translated into many languages, and is valued for its simple, uplifting message.Hoda Hadadi has illustrated over 60 children's books. Her intricate artwork, created by hand, is recognized worldwide. Her awards include the Gold Medal for Best Picture Book, International Book Award 2018 USA and Gold Medal for Best Illustrator at the Literary Classics Awards in 2017 for Drummer Girl.