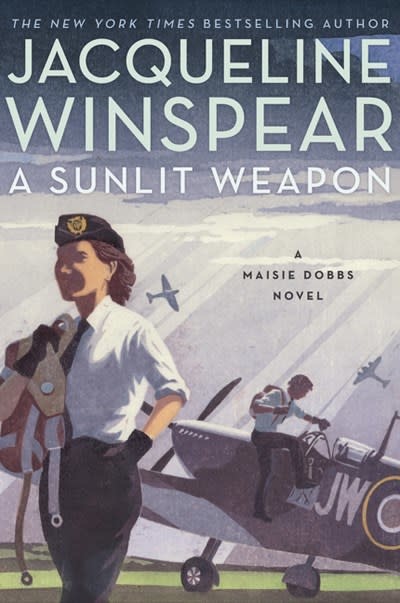 In the latest installment of the New York Times bestselling series, a series of possible attacks on British pilots leads Jacqueline Winspear’s beloved heroine Maisie Dobbs into a mystery involving First Lady Eleanor Roosevelt.“Over sixteen novels spanning three decades, Winspear’s Maisie Dobbs has lived. In real life, her quiet bravery, compassion, and dogged pursuit of the truth would have made her one of the Greatest Generation, a lesson in survival under the grimmest circumstances. . . . Fans and newcomers to the series will root for Dobbs and the other well-drawn characters.”—Los Angeles Times

London, October 1942. While delivering a Supermarine Spitfire—the fastest fighter aircraft in the world—to the RAF, twenty-two-year-old ferry pilot Jo Hardy comes under fire from a shooter on the ground. Investigating where the shots were fired, she finds an American serviceman tied up in a barn. When he’s turned over to military police, it quickly emerges that he’s a suspect in the disappearance of a second soldier.After another ferry pilot crashes in the same area, Jo turns to psychologist and investigator Maisie Dobbs for help. Maisie has never been busier, especially with her husband, a high-ranking British political attaché, busy planning for a very important guest: First Lady Eleanor Roosevelt. The wife of the president is a high-value target—British intelligence has already found evidence that German agents have been circling. Mrs. Roosevelt is clearly in danger and there may well be a direct connection between her visit, the death of the second ferry pilot, and the recent activities of two American servicemen.To keep the First Lady safe—and protect the soldier in custody—Maisie must uncover that connection. At the same time, she faces difficulties of an entirely different nature with her young daughter, Anna, who is experiencing wartime struggles of her own.

Jacqueline Winspear is the author of the New York Times bestsellers The Consequences of Fear, The American Agent, and To Die but Once, as well as thirteen other bestselling Maisie Dobbs novels. Her stand-alone novel, The Care and Management of Lies, was also a New York Times bestseller and a finalist for the Dayton Literary Peace Prize. She is the author of two works of nonfiction: a memoir, This Time Next Year We’ll Be Laughing, and What Would Maisie Do?, a companion book to the series.