Home » A Tale of Two Brothers 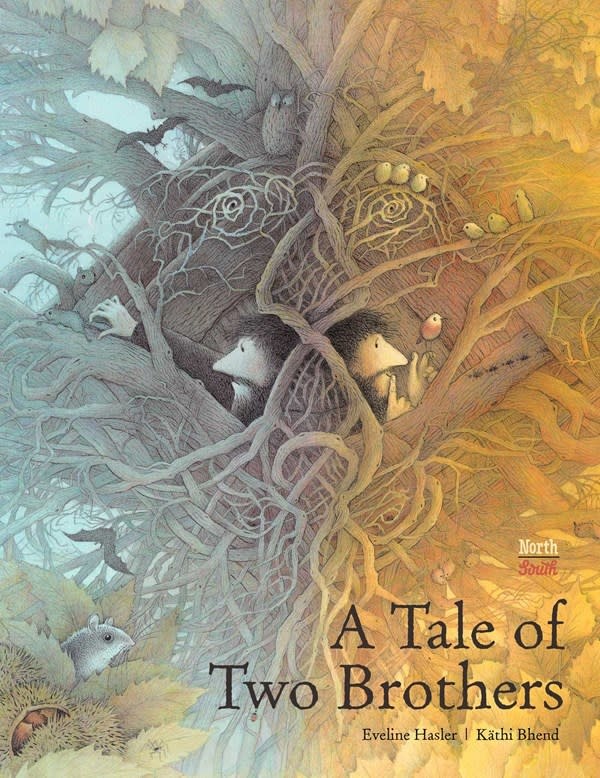 A Tale of Two Brothers

Ages 4 And Up, Grades P And Up

Kindness makes the world go around.

Morris and Boris are brothers who look like twins—even down to the small humps on their backs. Morris is kind and helpful to everyone he meets. Boris is impatient and unkind. When Boris refuses to take his turn to go check on their hut in the woods, Morris volunteers to go rather than have an argument. The forest is enchanted: eyes peek out of every bush and rustling can be heard in the leaves. Morris takes care not to disturb or destroy animals and plants. Respecting nature with every step, he makes friends with tendrils, toadstools, and the forest itself. In the dark of the night, the tree spirits and forest witch give him something that he will never forget—they make his hump go away. When Boris sees his transformed brother he runs up the mountain. But instead of having reverence for the creatures around him, Boris tramples carelessly through the forest. Before long, the beings of the magic wood come forth. How will the mushrooms and the tender plant elves react? And what will the forest witch give him? Boris wonders why he has not been treated the same as his kind brother, but when Boris’ own dog recoils in fear from his hand, he realizes he must change his ways.

Eveline Hasler and Käthi Bhend’s classic tale—based on a legend from the Ticino region of Switzerland—is lovingly reprinted and ready for a new generation to enjoy.

Eveline Hasler, born in Glarus, Switzerland, studied psychology and history in Friborg and Paris. She also worked as a teacher. Her many books for children are known throughout the world and have been honored with numerous international awards. Today Eveline lives and works in Switzerland, writing poetry and narrative works for adults.

Käthi Bhend was born in Olten, Switzerland. She studied commercial art and worked in advertising for several years. After winning a competition held by a Swiss publisher, she began illustrating children’s books. Among other honors, her work was awarded the Premio Grafico award at the Bologna Children’s Book Fair and received the Swiss Youth Book Prize in the same year (1990). Käthi has a passion for literature, art, music, and last but not least gardening. In 2019, Käthi was one of twenty-six Swiss artists honored at Switzerland’s host country appearance in Bologna. Today she lives in Heiden, Switzerland.