Home » A Taste of Honey: Kamala Outsmarts the Seven Thieves 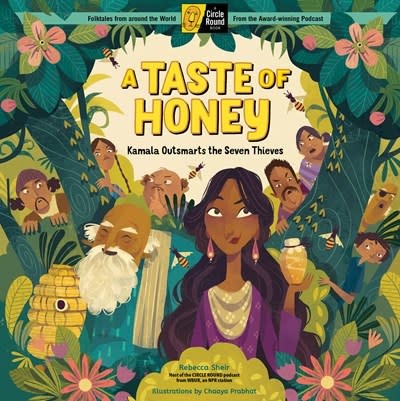 A Taste of Honey: Kamala Outsmarts the Seven Thieves

The award-winning children’s storytelling podcast, Circle Round, shares some of their most popular folktalkes in the new Circle Round book series, with each interactive book featuring a colorfully-illustrated read-aloud story accompanied by storytelling prompts that explore an important theme.  A Taste of Honey, a story with roots in India, invites kids to explore the value of learning to use your smarts and develop confident problem-solving abilities. The rich, colorful illustrations of Indian illustrator Chaaya Prabhat bring to life the narration of Circle Round host and writer, Rebecca Sheir.

In a village in the countryside lived a woman named Kamala who had the most delicious honey you’ve ever tasted. She collected honey from her hives to sell at the market, but business was slow, and she and her father were struggling to get by. Kamala knew she had to do something, so when she heard that the king’s son was getting married and all the villagers were invited to the party, she got an idea.When Kamala’s first plan doesn’t exactly work out and seven tricky thieves try to steal from her, she has to rely on her own wits to outsmart them—and discovers a rather sweet reward.The colorful illustrations of Chaaya Prabhat, who lives in Chennai, India complement Circle Round podcast host Rebecca Sheir's original adaptation of this traditional Indian folktale. Specially designed to be read aloud and shared, the story is accompanied by questions and prompts for conversation, along with creative storytelling activities.The creators of the award-winning podcast Circle Round, produced by WBUR radio (Boston's NPR station), bring their beloved combination of folktales and storytelling activities to book form in the first branded Circle Round book series. Podcast host, Rebecca Sheir, has uncovered folktales from a broad range of traditions, all exploring timeless values, such as kindness, generosity, acceptance, and more.

Rebecca Sheir is the author of the Circle Round books The Unwelcome Guest and A Taste of Honey, and the host, writer, and producer of the Circle Round storytelling podcast for kids and the grown-ups they love. Distributed by WBUR (Boston's NPR station), Circle Round is heard in all 50 states and nearly 200 countries, and has been featured in the New York Times, The Washington Post, and TIME. Sheir has also brought thousands of stories to life as a news reporter on public-radio shows like Morning Edition, All Things Considered, Here & Now, The Splendid Table, and Marketplace. She's hosted several weekly news programs, including AK (Alaska Public Media) and Metro Connection (WAMU 88.5), along with podcasts for the Folger Shakespeare Library and Slate Magazine. Sheir holds a BA in Film Studies from Columbia University and an MFA in Creative Nonfiction from the University of Iowa. She lives in western Massachusetts with her husband and son.