Home » A Way Out of No Way: A Memoir of Truth, Transformation, & the New American Story 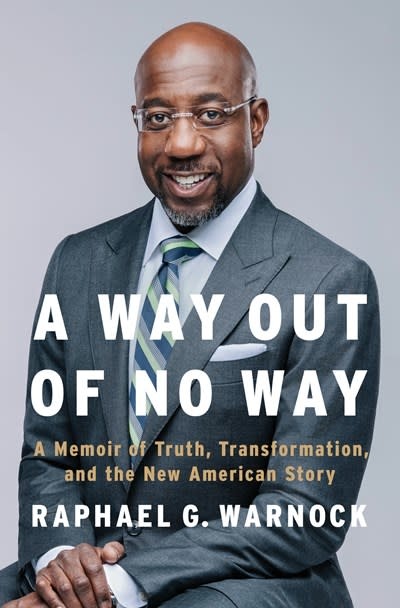 A Way Out of No Way: A Memoir of Truth, Transformation, & the New American Story

On the heels of his historic election to the United States Senate, Raphael Warnock shares his remarkable spiritual and personal journey

Senator Reverend Raphael Warnock occupies a singular place in American life. As Senior Pastor of Atlanta’s Ebenezer Baptist Church and now as a Senator from Georgia, he is the rare voice who can at once call out the uncomfortable truths that shape contemporary American life and, at a time of division, summon us all to a higher moral ground.

Senator Warnock grew up in the Kayton Homes housing projects in Savannah, the 11th of 12 children. His dad was a World War II veteran, and as a teenager, his mom picked tobacco and cotton in rural Georgia. Both  were Pentecostal preachers. After graduating from Morehouse, Dr. Martin Luther King Jr’s alma mater, Senator Warnock studied for a decade at Union Theological Seminary while serving at Harlem’s Abyssinian Baptist Church.  At just 35, he became the senior pastor at Ebenezer, where Dr. King preached and served.

In January, Senator Warnock won a run-off election that flipped control of the Senate at one of the most pivotal moments in recent American history. He is the first Black senator from Georgia, only the 11th Black senator in American history, and just the second from the South since Reconstruction. As he said in his maiden speech from the well of the Senate, Senator Warnock’s improbable journey reflects the ongoing toggle between the pain and promise of the American story.

A powerful preacher and a leading voice for voting rights and democracy, Senator Warnock has a once in a generation gift to inspire and lead us forward. A Way Out of No Way tells his remarkable American story for the first time.

The Rev. Dr. Raphael Gamaliel Warnock serves as the Senior Pastor of the historic Ebenezer Baptist Church of Atlanta. He also has served at the Sixth Avenue Baptist Church of Birmingham, the Abyssinian Baptist Church of New York City, and Baltimore’s Douglas Memorial Community Church. The Rev. Dr. Warnock holds degrees from Morehouse College and Union Theological Seminary. He is a member of Alpha Phi Alpha Fraternity, Inc., a Lifetime Member of the NAACP, and the former Chairman of the Board of the New Georgia Project. He is the author of The Divided Mind of the Black Church. In January 2021, Dr. Warnock became Georgia’s first Black senator.