Home » ABC: The Alphabet from the Sky (Board Book) 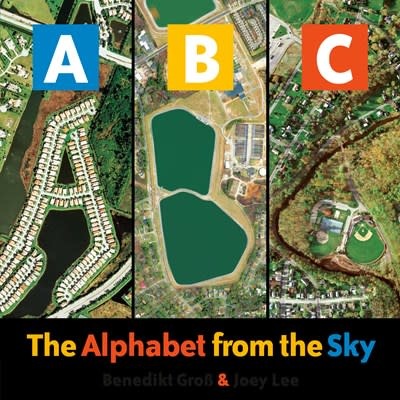 ABC: The Alphabet from the Sky (Board Book)

The youngest readers can learn the alphabet by finding the “accidental letters” hiding all over the United States! The ABCs pop out of roads, rivers, buildings, lakes, and more in beautiful aerial photos taken by the creators of the successful Aerial Bold Kickstarter campaign, now in board book!

Geographer and designer duo Benedikt Gross and Joey Lee have taken the alphabet to new heights—literally! Using satellite imagery and computer technology, the pair has discovered “accidental letters” all over the world. Take a journey around the United States in 26 letters with this special board book.

Benedikt Groß is a speculative and computational designer. He has a MA in Design Interactions from the Royal College of Art, is co-author of one of the top-selling books on computation design, Generative Design, and has exhibited and published his work widely. Benedikt balances his time working on commercial- and self-initiated research projects, teaching as a professor of interaction design, and raising a family.

Joey Lee is an experimental geographer and media artist from San Francisco working with maps and data. He has a BA from the University of California, Los Angeles, a MSc from the University of British Columbia, and has worked as a researcher at the Massachusetts Institute of Technology. Joey spends his time “learning through making” in his practice as a researcher, educator, and technologist.