Home » About Time: A History of Civilization in Twelve Clocks 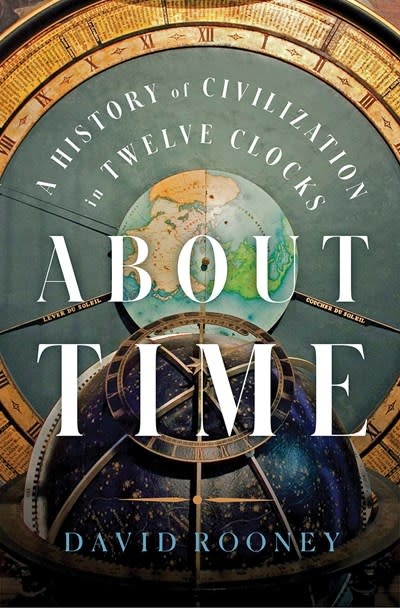 About Time: A History of Civilization in Twelve Clocks

A captivating, surprising history of timekeeping and how it has shaped our world.

For thousands of years, people of all cultures have made and used clocks, from the city sundials of ancient Rome to the medieval water clocks of imperial China, hourglasses fomenting revolution in the Middle Ages, the Stock Exchange clock of Amsterdam in 1611, Enlightenment observatories in India, and the high-precision clocks circling the Earth on a fleet of GPS satellites that have been launched since 1978. Clocks have helped us navigate the world and build empires, and have even taken us to the brink of destruction. Elites have used them to wield power, make money, govern citizens, and control lives—and sometimes the people have used them to fight back.Through the stories of twelve clocks, About Time brings pivotal moments from the past vividly to life. Historian and lifelong clock enthusiast David Rooney takes us from the unveiling of al-Jazari’s castle clock in 1206, in present-day Turkey; to the Cape of Good Hope observatory at the southern tip of Africa, where nineteenth-century British government astronomers moved the gears of empire with a time ball and a gun; to the burial of a plutonium clock now sealed beneath a public park in Osaka, where it will keep time for 5,000 years.Rooney shows, through these artifacts, how time has been imagined, politicized, and weaponized over the centuries—and how it might bring peace. Ultimately, he writes, the technical history of horology is only the start of the story. A history of clocks is a history of civilization.

David Rooney, the son of a prominent North East England clockmaker, is a historian of technology and former curator of timekeeping at the Royal Observatory, Greenwich. He helps run three horological institutions, including the world's oldest clock and watch museum, and lives in London, close to the Greenwich meridian.