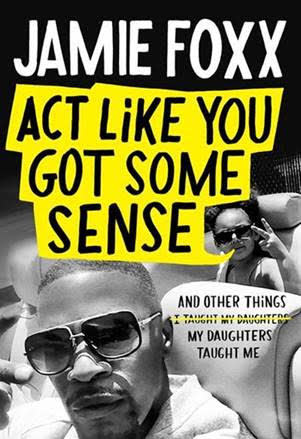 From Academy Award-winning multi-talent Jamie Foxx, a hilariously candid look at the joys and pitfalls of being the father of two daughters.

Jamie Foxx is not only an actor, comedian, and musician, he's also starring in his most humbling and long-running role yet as father to two independent girls: Corinne and Anelise. While his daughters have very different views on the world, there is one thing they can agree on: Dad gets on their motherf***ing nerves. Though every day with his girls brings hurdles and hilarity, he's learned a lot along the way.

In ACT LIKE YOU GOT SOME SENSE—a title inspired by his beloved and fierce grandmother—Jamie reveals his rocky parenting journey through priceless stories about the tough love and old-school values he learned growing up in the small town of Terrell, Texas; his early days trying to make it in Hollywood; and life after achieving stardom. You would think being an A-lister would ease his dad-duty struggles, but if anything, it has only made things more complicated. It seems that a teenage girl who just wants to blend in with her friends will not be excited to see her dad's flashy new convertible at the front of the carpool lane.

Hilarious, poignant, and always brutally honest, ACT LIKE YOU GOT SOME SENSE is Jamie Foxx like we’ve never seen him before, dealing with problems he never imagined he’d have.

Jamie Foxx is an award-winning actor, singer, and comedian. His accolades include an Academy Award for Best Actor, a BAFTA Award for Best Actor in a Leading Role, a Golden Globe Award for Best Actor in a Motion Picture - Musical or Comedy, and a SAG Award for Outstanding Performance by a Male Actor in a Leading Role. He's also a Grammy Award-winning musician, having produced four albums that charted in the top ten in the United States. Foxx received rave reviews for his standout performance in the 2019 Warner Bros. courtroom drama, Just Mercy. He has two daughters, Corinne and Anelise, and currently executive produces and hosts "Beat Shazam" on Fox with the former.