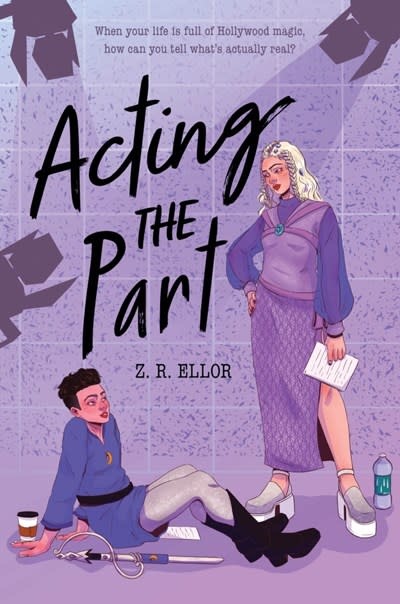 This delightfully tropey teen romance, perfect for fans of Ashley Poston and Lyla Lee, follows a queer teen actor navigating their gender identity while pretending to date their costar.

Queer actor Lily Ashton has found fame playing lesbian warrior Morgantha on the hit TV show Galaxy Spark. Lily knows how little representation queer girls have, so when the showrunners reveal that Morgantha’s on-screen love interest, Alietta, is going to be killed off, Lily orchestrates an elaborate fake-dating scheme with the standoffish actress who plays her, to generate press and ensure a happy ending for the #Morganetta ship.But while playing a doting girlfriend on and offscreen, Lily struggles with whether a word like “girl” applies to them at all. Their male online gaming persona, Frey, feels more authentically them than the curvy body they see in the mirror, and coming out as nonbinary to the crush they meet in an MMORPG makes them feel like they’ve got a shot at a real-world happily ever after. #Morganetta means so much to so many people, though, so Lily decides to keep presenting as female to the world and continue the dating charade. Even as they genuinely bond with their costar, they can’t ignore how much it hurts to be something they’re not.Lily’s always been good at playing a part. But are they ready to share their real self, even if it means throwing everything they’ve fought for away?

Z. R. Ellor is an author and literary agent from the Washington, DC, area. An avid lifelong reader, he wrote his first novel when he was twelve years old and never put down his pen. He graduated from Cornell University in 2016 with a dual degree in biology and English literature. His nonliterary interests include running, travel, and global cuisine. May the Best Man Win was his debut novel. Visit him online at www.zrellorbooks.com.