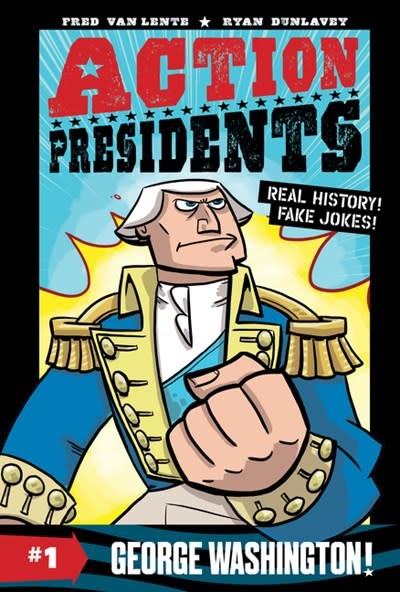 We all know that George Washington was our first president and a hero of the American Revolution. But did you also know that he didn’t want to be president, never thought he would fight in a war, and had teeth so bad that he hated to smile?Told through bold and hilarious comic-style illustrations, the first Action Presidents book features the all-too-true history of the ultimate founding father, prime patriot, and awesome American George Washington. Readers will love the laugh-out-loud Action Presidents series, where the history is real and the jokes are fake!

Fred Van Lente is the New York Times bestselling author of comic books like Cowboys & Aliens and Marvel Zombies. He lives in Brooklyn, like every other writer on the planet (by law), with his wife, Crystal, and some mostly ungrateful cats. His previous funny nonfiction comics with Ryan were Action Philosophers! (named a YALSA Great Graphic Novels for Teens by the American Library Association) and The Comic Book History of Comics (which Fred’s mom really likes). He does not own a time machine but will be the first on line to buy one as soon as someone gets around to inventing them. Full-time award-winning cartoonist and part-time scout leader Ryan Dunlavey spends every day and most nights drawing cool and fun stuff for the world’s most charming and attractive art directors. He’s also the artist of the graphic novels Action Philosophers!, The Comic Book History of Comics (both with Fred Van Lente), Dirt Candy: A Cookbook (with chef Amanda Cohen), and the comic strip Li’l Classix (with Grady Hendrix). On the rare occasions when he’s not in his 100 percent cat-free home studio (allergies), he can be spotted with his wife, Liza, as they wrangle their two children on adventures in and around New York City.