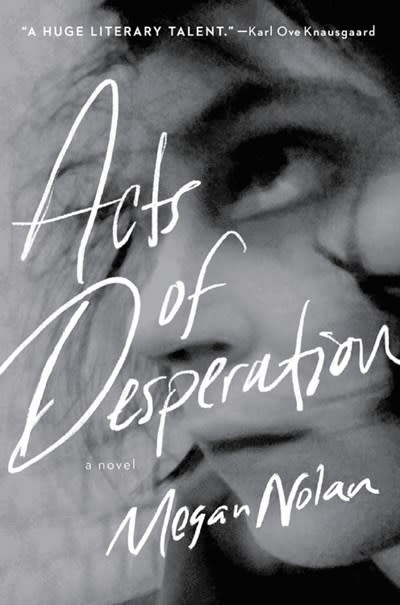 Heralding the arrival of “a huge literary talent” (Karl Ove Knausgaard), Megan Nolan’s riveting debut is “a blistering anti-romance” (Catherine Lacey) about love addiction and what it does to us.

Wouldn’t I do anything to reverse my loss, the absence of him?

In the first scene of this provocative gut-punch of a novel, our unnamed narrator meets a magnetic writer named Ciaran and falls, against her better judgment, completely in his power. After a brief, all-consuming romance he abruptly rejects her, sending her into a tailspin of jealous obsession and longing. If he ever comes back to her, she resolves to hang onto him and his love at all costs, even if it destroys her…

Part breathless confession, part lucid critique, Acts of Desperation renders a consciousness split between rebellion and submission, between escaping degradation and eroticizing it, between loving and being lovable. With unsettling, electric precision, Nolan dissects one of life’s most elusive mysteries: Why do we want what we want, and how do we want it?

Combining the intellectual excitement of Rachel Cusk with the emotional rawness of Elena Ferrante, Acts of Desperation interrogates the nature of desire, power, and toxic relationships, challenging us to reckon honestly with our own insatiability.

Megan Nolan lives in London and was born in 1990 in Waterford, Ireland. She has a robust and devoted following for her writing which includes essays, fiction and reviews published widely including in the New York Times, the White Review, the Sunday Times, the Village Voice, the Guardian, and in the literary anthology, Winter Papers. Regular columns of her cultural commentary appear in i newspaper, Huck Magazine and the New Statesman. Acts of Desperation is her first novel.