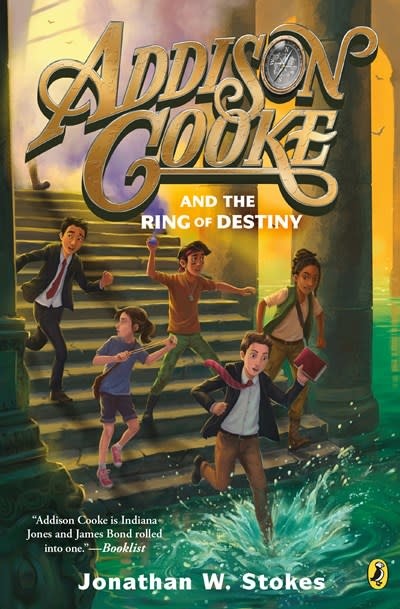 Addison Cooke 03 The Ring of Destiny

In the tradition of Indiana Jones and The Goonies, the next installment of this comedic adventure series sends young Addison and his friends on the run from fortune hunters linked to an ancient Cooke clan curse.

Soon after the disappearance of his aunt Delia and uncle Nigel outside the tomb of notorious Mongolian leader Genghis Khan, amateur archeologist Addison Cooke, his sister Molly, and their best friends Raj and Eddie, embark on another globe-trotting adventure.

When a mysterious package arrives on Addison’s doorstep, criminals and fortune-hunters from around the world are suddenly hunting the Cooke family. Addison and team will travel to London, Paris, Istanbul, and beyond, on the run for their lives to unravel the mystery of the package, find out what really happened to Aunt Delia and Uncle Nigel, and come face-to-face with the terrifying Vrolock Malazar. But Addison and the team find there are dangerous secrets about his aunt and uncle’s pasts and hidden truths about the Cooke clan that must be uncovered.

Series Overview: Addison Cooke and the Treasure of the Incas (10/2016)

Jonathan W. Stokes (www.jonathanwstokes.com) is a former teacher who is now a Hollywood screenwriter. He has written screenplays on assignment for Warner Brothers, Universal, Fox, Paramount, New Line, and Sony/Columbia. Inspired by a childhood love of The Goonies and Ferris Bueller’s Day Off, Jonathan set out to write his first novel, Addison Cooke and the Treasure of the Incas. Born in Manhattan, he currently resides in Los Angeles. Follow Jonathan on Twitter @jonathanwstokes.