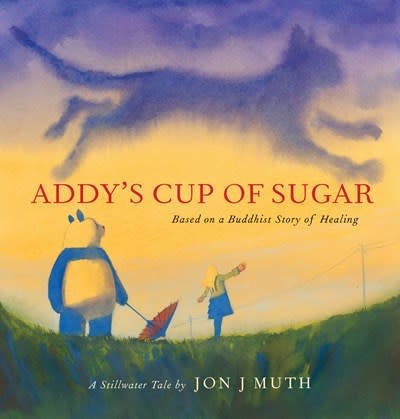 Addy has moved to a new neighborhood with her beloved kitten, Trumpet. They are best friends, and inseparable. But when Trumpet is hit by a car, Addy seeks her wise friend, Stillwater. She is sure he will know how to bring Trumpet back to life.

Stillwater tells Addy she will need to find a special medicine. To do this, she must go to everyone in the neighborhood and collect a cup of sugar. But there is one condition: it can only come from the home of someone who has never been touched by loss.

Addy goes from house to house. And when she returns home, Stillwater asks for her cup of sugar. But, of course, she has none. For there isn't a person who has not felt the pain of loss.

How Addy comes to understand how this special medicine works makes for a reassuring story of consolation and healing.

Muth's stunning interpretation of this Buddhist tale is infused with light and compassion. And it celebrates the fragile and sacred moments we all share with those we love.

Jon J Muth, renowned in the world of graphic novels, won an Eisner Award for his paintings in the graphic novel, The Mystery Play by Grant Morrison. He’s partnered with Neil Gaiman on The Sandman: The Wake, Walter and Louise Simonson on Havoc & Wolverine: Meltdown, and J. M. DeMatteis on Moonshadow and Silver Surfer. His enchanting picture books include his Caldecott Honor Book Zen Shorts and four companion books featuring Stillwater the Panda. His book The Three Questions, based on a short story by Tolstoy, was called "quietly life-changing" by the New York Times Book Review. And the Horn Book called Jon's Stone Soup "delicious and satisfying." His exquisitely beautiful books have been translated into more than 15 languages and are cherished by readers of all ages. Jon lives in New York State with his wife and their four children.