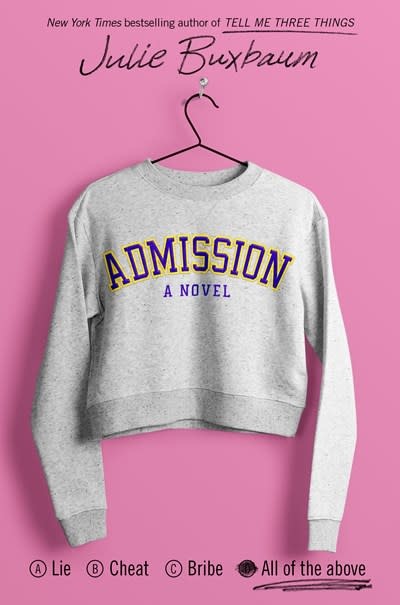 From the New York Times bestselling author of Tell Me Three Things comes an of-the-moment novel that peeks inside the private lives of the hypercompetitive and the hyperprivileged and takes on the college admissions bribery scandal that rocked the country.

It’s good to be Chloe Wynn Berringer. She’s headed off to the college of her dreams. She’s going to prom with the boy she’s had a crush on since middle school. Her best friend always has her back, and her mom, a B-list Hollywood celebrity, may finally be on her way to the B+ list. It’s good to be Chloe Wynn Berringer—at least, it was, until the FBI came knocking on her front door, guns at the ready, and her future went up in smoke. Now her mother is under arrest in a massive college admissions bribery scandal. Chloe, too, might be facing charges, and even time behind bars. The public is furious, the press is rabid, and the US attorney is out for blood.

As she loses everything she’s long taken for granted, Chloe must reckon not only with the truth of what happened, but also with the examination of her own guilt. Why did her parents think the only way for her to succeed was to cheat for her? What did she know, and when did she know it? And perhaps most importantly, what does it mean to be complicit?

JULIE BUXBAUM is the New York Times bestselling author of the young adult novels Hope and Other Punch Lines, What to Say Next, and Tell Me Three Things. She also wrote the critically acclaimed The Opposite of Love and After You. She lives in Los Angeles with her husband and two children. You can find her procrastinating on social @juliebux (Twitter) and @juliebuxbaum (Insta).