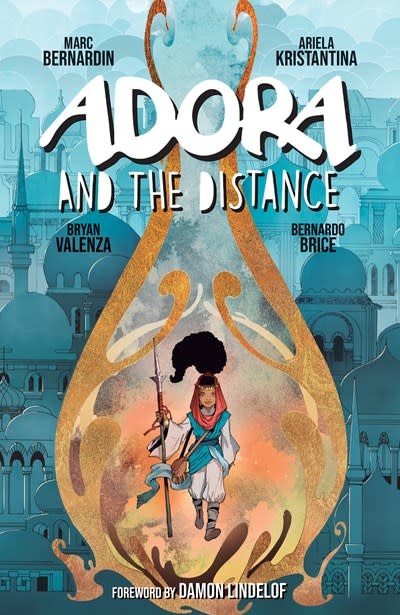 Adora and the Distance [Graphic Novel]

A new YA fantasy graphic novel following the epic adventures of Adora, a brave young woman of color who lives in a fantastical world with underground pirates, ghosts, and a mysterious force called “The Distance.” The Distance threatens to destroy it all, and only Adora can stop it!

Includes an introduction by Damon Lindelof (Lost, The Leftovers, HBO’s The Watchmen)!

“Marc Bernardin’s gorgeous, powerful Adora and the Distance was his way of connecting with a child on the Autism spectrum.” — Vanity Fair

“A letter from a parent to a child with love so overflowing that it’s visible on every page.” — Kelly Sue DeConnick (Captain Marvel, Aquaman)

“Gorgeously rendered and tenderly told, ADORA AND THE DISTANCE is the story of an extraordinary child—and the extraordinary people who love her. You cannot help but be moved.” —G. Willow Wilson (Co-creator, Ms. Marvel)

“Adora and the Distance begins as a fantasy, all fun and brilliance, like a Game of Thrones for teenage girls, and then transmutes into something deeper and more moving, a reflection of an interior life that solves all the riddles it has propounded in a way that is both satisfying and heartbreaking. I’m so glad it exists.” — Neil Gaiman (The Sandman, Coraline, American Gods)

”Bernardin and Kristantina have pulled off a true magic trick. Adora and the Distance lures you in with dazzling fantasy yet its true magic lies its passionate, heartfelt exploration of deeper truths about connection, understanding and forgiveness through love. One of the most daring and heartfelt books I’ve read this year." — Scott Snyder (Batman, Nocterra)

Series Overview: Collects Adora and the Distance (digital only, from ComiXology)

Marc Bernardin is a television writer-producer as well as a comic book author. His TV work includes serving as a supervising producer on Star Trek: Picard, a supervising producer on Starz’s The Continental, was most recently a producer on Amazon’s Victorian fantasy series Carnival Row, a co-producer on the USA Network spy drama Treadstone, a staff writer on the first season of Castle Rock, the Stephen King and J.J. Abrams original series for Hulu, and a staff writer on Syfy’s superheroic television series Alphas.

In an earlier life, he was an entertainment journalist: He was the Film Editor for the Los Angeles Times, overseeing the paper’s movie coverage and coordinating the efforts of a dozen staffers. He was also the Deputy Editor of Playboy.com, a senior editor for The Hollywood Reporter, a senior editor for Entertainment Weekly, managing editor of Starlog magazine, and a consulting editor for Fangoria magazine. As a freelance writer, he has contributed to Wired, GQ, Empire, Details, Vulture.com, and Syfy.com.

He also has written a fair number of comic books over the years. His most recent is Adora and the Distance, an original graphic novel coming from Comixology in early 2020. Other works include Genius (Image), an urban revolutionary miniseries which The A.V. Club called "the most relevant comic on stands, Static Shock (one of DC Comics’ premiere African-American superheroes), X-Men Origins: Nightcrawler, Wolverine, The Authority, The Highwaymen, and Monster Attack Network.