Home » Adventures of a Dwergish Girl 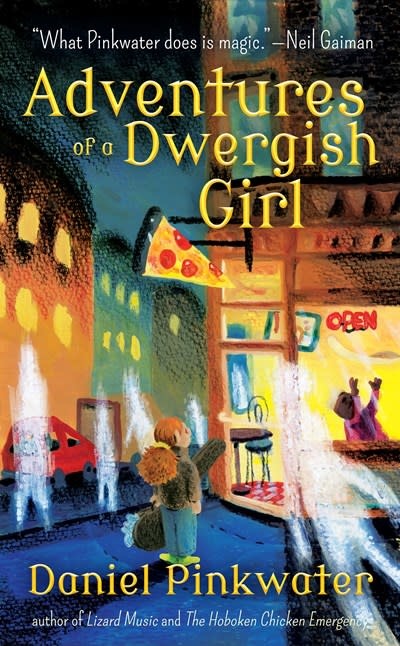 Adventures of a Dwergish Girl

Bestselling author Daniel Pinkwater (Lizard Music, The Hoboken Chicken Emergency) returns in classic form with the illustrated, middle-grade adventures of one young Molly O’Malley: a dwarf (well, dwarf-ish) girl who just won’t settle for a boring life in the Catskills.

“Daniel Pinkwater’s books don’t strive for greatness; they don’t seem to be trying at all. That’s the magic of them.”

Molly O'Malley is a clever, adventurous girl. She is also a Dwerg. Dwergs are strange folks who live very quietly in the Catskill mountains, have lots of gold, and are kind of like dwarves (but also not!).

Molly isn’t interested in cooking and weaving, as she is expected to be. So, she sets off to see the world for herself. Which means a new job, a trip to New York City, prowling gangsters, an adorable king, a city witch, and many historical ghosts. More importantly, it means excellent pizza, new friends, and very quick thinking.

Now someone is pursuing the Dwergs for their gold. Can Molly O’Malley save the day?

Daniel Pinkwater is the author and sometimes illustrator of over eighty (and counting) wildly popular books, including The Neddiad, The Hoboken Chicken Emergency, Lizard Music, The Snarkout Boys and the Avocado of Death, Fat Men from Space, Borgel, and the picture book The Big Orange Splot. He has also illustrated many of his own books, although for more recent works that task has passed to his wife, illustrator and novelist Jill Pinkwater. Pinkwater is an occasional commentator on National Public Radio’s All Things Considered and appears regularly on Weekend Edition Saturday, where he reviews kids’ books with host Scott Simon. Pinkwater also contributes to Wondertime, and has in the past been spotted on the pages of the New York Times Magazine, OMNI, and many other publications.

Pinkwater lives with his wife and several dogs and cats in a very old farmhouse in New York’s Hudson River.

Aaron Renier (Illustrator) is the author of three graphic novels for younger readers; Spiral-Bound, Walker Bean, and Walker Bean and the Knights of the Waxing Moon. He is the recipient of the Eisner award in 2006 for talent deserving of wider recognition, and was an inaugural resident for the Sendak Fellowship in 2010. He teaches drawing and comics at universities in Chicago.