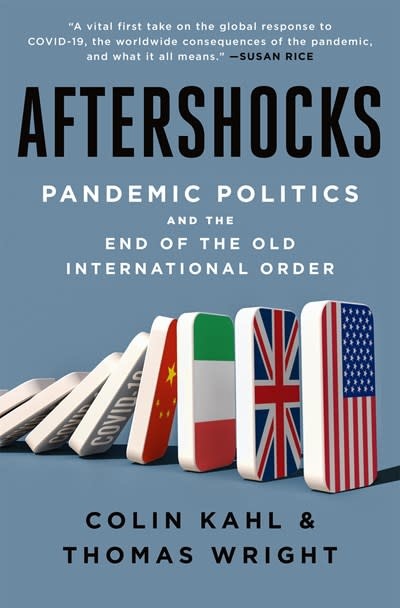 Aftershocks: Pandemic Politics & the End of the Old International Order

Two of America's leading national security experts offer the most definitive account of the global impact of COVID-19 and the political shock waves for the world order in the 21st Century.

The COVID-19 crisis is the greatest shock to world order since World War II. The economic crash caused by the pandemic is the worst since the Great Depression and the US death toll is the highest on record—welcome to 2020, a new inflection point in world history.

Aftershocks is both a riveting journalistic account of one of the strangest years on record and a comprehensive analysis of the pandemic’s ongoing impact on the foundational institutions and ideas that have shaped the modern world. This is the first crisis in decades without a glimmer of American leadership and it shows?there has been no international cooperation on a quintessential global challenge. Every country has followed its own path?nationalizing supplies, shutting their borders, and largely ignoring the rest of the world. The international order the United States constructed seven decades ago is in tatters, and the world is adrift.

And yet, there are some signs of hope. The COVID-19 crisis reminds us of our common humanity and shared fate. The public has, for the most part, responded stoically and with kindness. Some democracies?South Korea, Taiwan, Germany, New Zealand, among others have responded well. America may emerge from the crisis with a new resolve to deal with non-traditional threats, like pandemic disease, and a new demand for effective collective action with other democratic nations.

But one thing is certain: America and the world will never be the same again.

Colin Kahl was VP Joe Biden’s national security advisor from 2013-2017 and a frequent contributor to CNN and MSNBC. Thomas Wright is a senior fellow at Brookings and a contributing writer at The Atlantic.