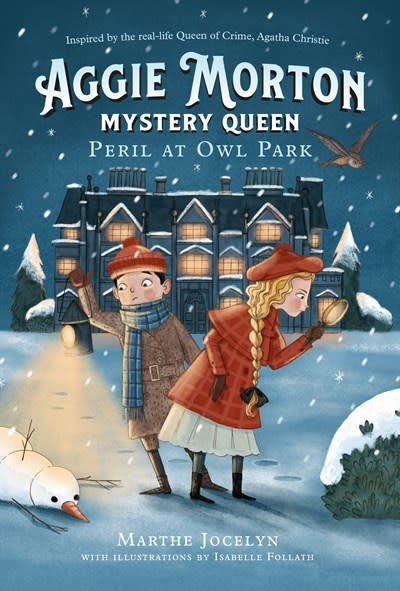 For young detective Aggie Morton and her friend Hector, Christmas becomes a lot more exciting when a dead body is found in this second book in the Aggie Morton, Mystery Queen series, inspired by the life of Agatha Christie as a child and her most popular creation, Hercule Poirot. For fans of The Wollstonecraft Detective Agency.

Aspiring writer Aggie Morton is looking forward to Christmas. Having just solved a murder and survived her own brush with death in her small town of Torquay on the coast of England, Aggie can’t wait to spend the holidays with her sister Marjorie, the new Lady Greyson of Owl Park, an enormous manor house in the country; Grannie Jane and her fellow sleuth and partner in crime, Hector Perot. Owl Park holds many delights including Aggie’s almost cousin Lucy, exciting and glamorous visitors from Ceylon and disguises aplenty in the form of a group of travelling actors, not to mention a secret passageway AND an enormous, cursed emerald. Not even glowering old Lady Greyson (the Senior) can interfere with Aggie’s festive cheer. But when Aggie and her friends discover a body instead of presents on Christmas morning, things take a deadly serious turn. With the help of a certain nosy reporter, Aggie and Hector will once again have to put their deductive skills and imaginations to work to find the murderer on the loose.

Filled with mystery, adventure, unforgettable characters and several helpings of tea and Christmas pudding, Peril at Owl Park is the second book in a new series for middle-grade readers and Christie and Poirot fans everywhere.

Series Overview: A twisting, charming middle-grade mystery series set in 1902 coastal England inspired by the imagined life of Agatha Christie as a child and her most popular creation Hercule Poirot.

Toronto-born MARTHE JOCELYN is the award-winning author and illustrator of over twenty books for children of all ages. Her most recent picture book for Tundra (which she also illustrated), Sam Sorts, was honored by the United States Board on Books for Youth as an Outstanding International Book. Her picture book Hannah’s Collections was shortlisted for the Governor General’s Literary Award for Illustration, and her novel Mable Riley won the inaugural TD Canadian Children’s Literature Award. Marthe is also the 2009 recipient of the prestigious Vicky Metcalf Award for her body of work.

ISABELLE FOLLATH has been a freelance illustrator for advertising agencies, magazines and book publishers for over fifteen years, but her true passion lies in illustrating children's books. She uses pen and ink, watercolor and pencil alongside digital techniques to create her work. She loves drinking an alarming amount of coffee, learning new crafts and looking for the perfect greenish-gold color. Isabelle lives with her family in Switzerland.