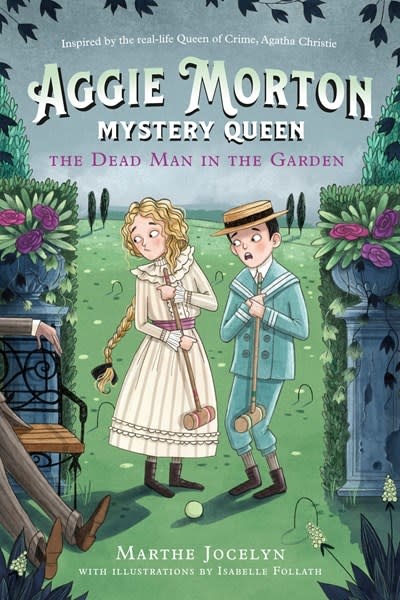 Aggie Morton, Mystery Queen: The Dead Man in the Garden

For young detective Aggie Morton and her friend Hector, a spa stay becomes a lot more thrilling when TWO dead bodies are found in this third book in the Aggie Morton, Mystery Queen series, inspired by the life of Agatha Christie as a child and her most popular creation, Hercule Poirot. For fans of Enola Holmes.

Aspiring writer Aggie Morton is ready to enjoy an invigorating trip to a Yorkshire spa, where her widowed mother can take the waters and recover from a long mourning period. Having solved yet another murder and faced extreme peril with her best friend Hector over Christmas, Aggie’s Morbid Preoccupation is on alert when rumors abound about the spa’s recently deceased former patient…and then another body appears under mysterious circumstances. Together with Grannie Jane, and often in the company of George, a young patient at the spa, Aggie and Hector take a closer look at the guests and staff of the Wellspring Hotel, and venture into the intriguing world of the local undertaker. Has there been a murder—or even two? As Aggie and Hector ignite their deductive skills, their restful trip takes a sudden, dangerous turn.

Series Overview: A twisting, charming middle-grade mystery series set in 1903 coastal England inspired by the imagined life of Agatha Christie as a child and her most popular creation Hercule Poirot.

Toronto-born MARTHE JOCELYN is the award-winning author and illustrator of nearly fifty books for children of all ages. Her picture book Sam Sorts was honored by the United States Board on Books for Youth as an Outstanding International Book, and another picture book, Hannah’s Collections, was shortlisted for the Governor General’s Literary Award for Illustration. Her novel Mable Riley won the inaugural TD Canadian Children’s Literature Award. Marthe is also the 2009 recipient of the prestigious Vicky Metcalf Award for her body of work.

ISABELLE FOLLATH has been a freelance illustrator for advertising agencies, magazines and book publishers for over fifteen years, but her true passion lies in illustrating children's books. She uses pen and ink, watercolor and pencil alongside digital techniques to create her work. She loves drinking an alarming amount of coffee, learning new crafts and looking for the perfect greenish-gold color. Isabelle lives with her family in Switzerland.