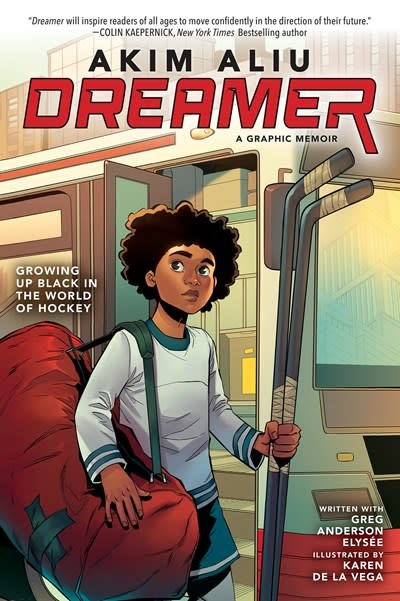 This honest, engrossing graphic memoir tells the story of professional athlete and activist Akim Aliu's incredible life as a hockey prodigy in Canada.Akim Aliu — also known as “Dreamer” — is a Ukrainian-Nigerian-Canadian professional hockey player whose career took him all around the world and who experienced systemic racism at every turn. Dreamer tells Akim's incredible story, from being the only Black child in his Ukrainian community, to his family struggling to make ends meet while living in Toronto, to confronting the racist violence he often experienced both on and off the ice. This is a gut-wrenching and riveting graphic novel memoir that reminds us to never stop dreaming, and is sure to inspire young readers everywhere."With honesty and courage, Akim Aliu's Dreamer will inspire readers of all ages to move confidently in the direction of their future." - Colin Kaepernick

Karen De la Vega was born and raised in the northern mountainous city of Monterrey, Nuevo León, México. After spending her childhood being grounded for drawing in class, she entered a bachelor's degree in psychology to better understand her creative mind and human consciousness. Upon graduating in 2021, Karen decided to accept her madness and dedicate herself to illustration and comic art. She is always seeking to convey meaningful messages and aesthetics through her art, applying her knowledge in child and adolescent psychology to develop concepts that visually align with the exciting characters, environments, and stories of Middle Grade and Young Adult projects. Dreamer, her first published work, will release in Spring 2023.

Greg Anderson Elysée is a Brooklyn born, Haitian-American writer, educator, filmmaker, and model. He has been teaching various forms of filmmaking, including narrative and documentary, from elementary level to the elderly since 2012. A former journalist for theOuthousers.com, he also ran his own column, (Heard It Thru) The Griotvine, where he showcased independent creators of color and LGBTQ creators. He also wrote for the independent pop culture news website Bleeding Cool.Greg's original comic series "Is'nana: The Were-Spider" is a five-time Glyph Award Winner. His other work includes "The Gentleman: Darkness of the Void" and "Marassa," both published by Evoluzione Publishing, “OneNation: Stronghold” published by 133art Publishing, and work in the Lion Forge graphic novel collection "Puerto Rico Strong." He lives in Brooklyn.

Akim Aliu is the son of a Nigerian father and a Ukrainian mother. Born in Nigeria, he spent years of his youth in Africa and Ukraine before moving to Toronto. A hockey prodigy, Akim was drafted into the NHL as a teenager and played for the Calgary Flames. He experienced systemic racism, hazing, and abuse at every level of competitive hockey he played in — from Pee Wee hockey to the NHL — but has never stopped dreaming of a world where every kid, regardless of background, can be accepted for who he or she is (and play hockey, of course).In May 2020, Akim wrote an article for the Players’ Tribune entitled “Hockey is Not for Everyone,” where he identifies the racism and violence he endured as a Black athlete within the sport of hockey. He has since partnered with the Time to Dream Foundation and the Hockey Diversity Alliance to help their mission to eradicate racism and intolerance in hockey, and continues to play hockey professionally in Europe.