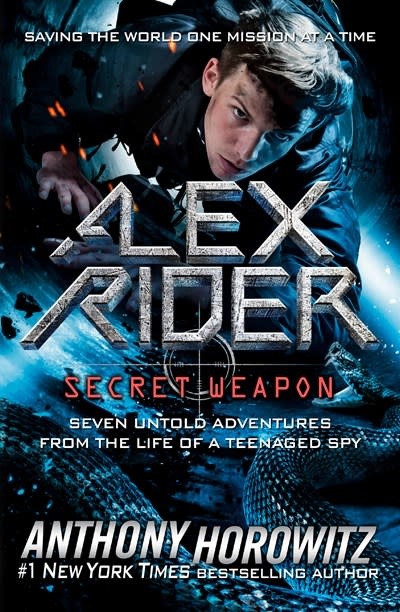 Inspired by Horowitz’s millions of fans worldwide, Secret Weapon expands the world of Alex Rider with more thrilling action and pulse-pounding heroics. Follow Alex as he infiltrates a terrorist hideout in Afghanistan, fights to prevent an assassination attempt at a ski resort over Christmas, and much more! The #1 New York Times bestselling Alex Rider is back with more exciting, edge-of-your-seats adventures!

Anthony Horowitz (anthonyhorowitz.com) is a world-renowned screenwriter for film and television, and has received many awards. In 2014 he was awarded an OBE at Buckingham Palace for services to literature. He is the author of the #1 New York Times bestselling Alex Rider novels, which have sold 16 million copies worldwide as well as spawning a major motion picture and a major TV series now in production. A master of the spy thriller, Mr. Horowitz is the only writer authorized by both the Arthur Conan Doyle and Ian Fleming estates to write original Sherlock Holmes and James Bond novels, respectively. He lives with his wife and two sons in London, England.