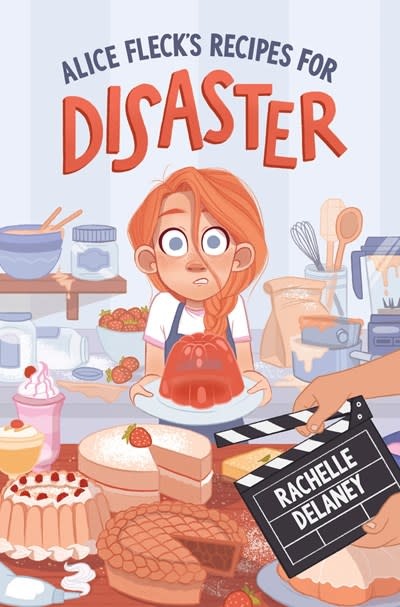 When Alice agreed to appear in a reality cooking show with her father, she had no idea she’d find herself in the middle of a mystery! Will Alice and her new friends be able to save the show? A light-hearted and funny middle grade novel for fans of Rebecca Stead and Linda Mulally Hunt.

Alice Fleck’s father is a culinary historian, and for as long as she can remember, she’s been helping him recreate meals from the past—a hobby she prefers to keep secret from kids her age. But when her father’s new girlfriend enters them into a cooking competition at a Victorian festival, Alice finds herself and her hobby thrust into the spotlight.

And that’s just the first of many surprises awaiting her. On arriving at the festival, Alice learns that she and her father are actually contestants on Culinary Combat, a new reality TV show hosted by Tom Truffleman, the most famous and fierce judge on TV! And to make matters worse, she begins to suspect that someone is at work behind the scenes, sabotaging the competition.

It’s up to Alice, with the help of a few new friends, to find the saboteur before the entire competition is ruined, all the while tackling some of the hardest cooking challenges of her life…for the whole world to see.

RACHELLE DELANEY is the author of several middle-grade novels, including The Metro Dogs of Moscow, which was a CLA Book of the Year Honor Book, as well as a finalist for the Silver Birch Award and the Red Cedar Award, among others. Its sequel, The Circus Dogs of Prague, was shortlisted for the Pacific Northwest Library Association Young Reader’s Choice Award. The Bonaventure Adventures won BC’s Chocolate Lily Award in 2019, and Clara Voyant, her most recent novel, is shortlisted for this year’s Chocolate Lily Award. Visit her at www.rachelledelaney.com.