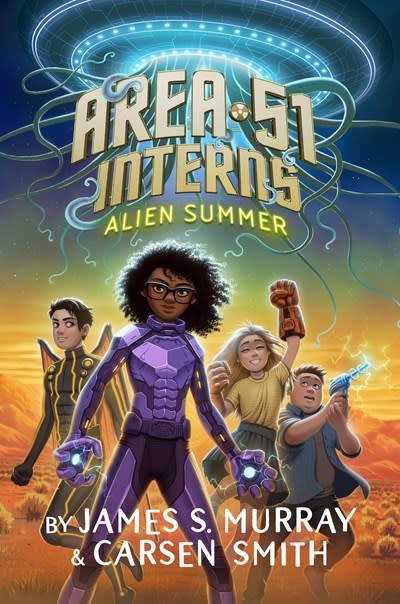 From the mind of Murr from the Impractical Jokers comes a new hilarious, action-packed series about a world of bizarre creatures, wacky gadgets, and four kid interns at the most interesting place on Earth: Area 51!

It’s the first day of summer vacation, and Viv Harlow just wants to relax with her friends at the beach before they all go to different high schools next year. She is definitely not interested in visiting her mom’s office, even if Director Harlow works at the famous Area 51. But when an alarm sounds beneath the secret base and a whole race of aliens escape, she’s about to get much more than she bargained for. Viv, Charlotte, Ray, and Elijah (who Viv is totally NOT crushing on) will have to work together, gear up with gadgets, and even protect a baby alien to save the day and defend Area 51.

The debut middle-grade series from Murr of the Impractical Jokers, Area 51 Interns is filled with enough high-tech hijinks, bizarre creatures, and laugh-out-loud humor (plus an extra color insert full of gadgets) to make even alien skeptics hooked for more!

James S. Murray is a writer, executive producer, and actor, best known as “Murr” on the hit television show Impractical Jokers on truTV and for his comedy troupe, the Tenderloins. He also served as the senior vice president of development for NorthSouth Productions for over a decade and is the owner of Impractical Productions, Inc. Originally from Staten Island, he now lives in Manhattan. @jamessmurray. Carsen Smith is a writer, producer, and the Director of Development at Impractical Productions. She lives in Brooklyn, New York.