Home » All That’s Left in the World 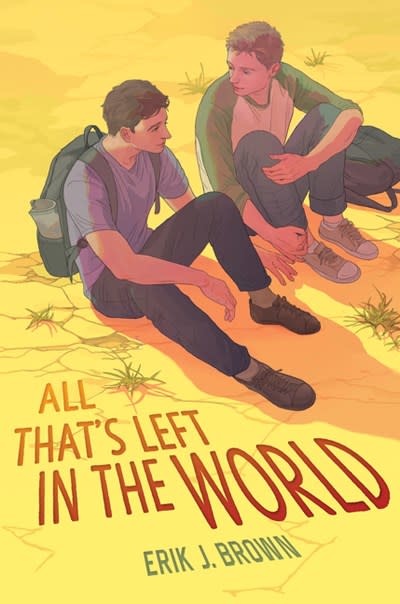 All That’s Left in the World

WHAT IF IT’S US meets LIFE AS WE KNEW IT in this postapocalyptic, queer YA adventure romance from debut author Erik J. Brown. Perfect for fans of Adam Silvera and Alex London.

When Andrew stumbles upon Jamie’s house, he’s injured, starved, and has nothing left to lose. A deadly pathogen has killed off most of the world’s population, including everyone both boys have ever loved. And if this new world has taught them anything, it’s to be scared of what other desperate people will do . . . so why does it seem so easy for them to trust each other?After danger breaches their shelter, they flee south in search of civilization. But something isn’t adding up about Andrew’s story, and it could cost them everything. And Jamie has a secret, too. He’s starting to feel something more than friendship for Andrew, adding another layer of fear and confusion to an already tumultuous journey.The road ahead of them is long, and to survive, they’ll have to shed their secrets, face the consequences of their actions, and find the courage to fight for the future they desire, together. Only one thing feels certain: all that’s left in their world is the undeniable pull they have toward each other.

When not writing genre-blending YA books, Erik J. Brown enjoys traveling and embarking on the relentless quest of appeasing his Shiba Inu. Erik was a 2021 Lambda Literary Emerging Writers Fellow, and currently  lives in Philadelphia with his husband. All That's Left in the World is his debut novel.