Home » All the Stars and Teeth 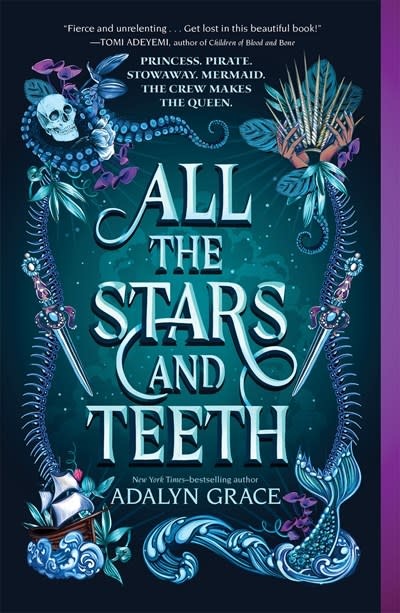 All the Stars and Teeth

In this thrilling YA fantasy set in a kingdom where danger lurks beneath the sea, mermaids seek vengeance with song, and magic is a choice.

As princess of the island kingdom Visidia, Amora Montara has spent her entire life training to be High Animancer—the master of souls. To secure her place as heir to the throne, she must prove her mastery of the monarchy’s dangerous magic. When her demonstration goes awry, Amora is forced to flee. She strikes a deal with Bastian, a mysterious pirate: he’ll help her prove she’s fit to rule, if she’ll help him reclaim his stolen magic.

But sailing the kingdom holds more wonder—and more peril—than Amora anticipated. A destructive new magic is on the rise, and if Amora is to conquer it, she’ll need to face legendary monsters, cross paths with vengeful mermaids, and deal with a stowaway she never expected… or risk the fate of Visidia and lose the crown forever.