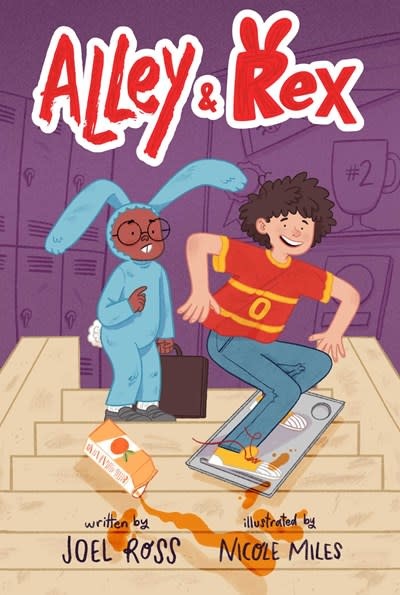 Fans of Diary of a Wimpy Kid and Wayside School will love this first book in a new, off-the-wall middle grade series about two boys—one with the heart of a lion and the test scores of a baked potato, the other a shy boy genius in a bunny suit—finding their strengths and true friendship.

Sixth-grader Alley Katz is innocently trying to help a bunch of kindergarteners when the burrito hits the fan. Literally. A burrito. A ceiling fan. A hail of beans. Now he has to get an A on his science test or he’ll be transferred to the dreaded Steggles Academy.

An A seems impossible! Alley is kind, intrepid, and well-liked, but for some reason he doesn’t get graded on any of that. So the principal assigns a peer mentor to help: Rex, a fourth-grade genius who wears a bunny suit.

Alley is totally in favor of both bunnies and fourth graders, but he doesn’t need Rex. He has his own foolproof plan to ace the test. Still, Rex is determined to fulfill his duty as Alley’s mentor—and he may need some help of his own. One boy needs to stay in school, the other needs to get through it. Can this odd couple save the day—and each other?

Joel Ross is the author of The Fog Diver, Beast & Crown, and Alley & Rex series. He’s never worn a school uniform, but he did try a spoonful of calves’ foot jelly once. The taste lingers. Visit him at TheJoelJoel.com.

Nicole Miles was born in the United States but grew up in the Bahamas where all schools have uniforms but nobody eats calves’ foot jelly (as far as she is aware). She feels this is a fair compromise. She now lives in the United Kingdom, and her tiny place on the internet is NicoleMillo.com.