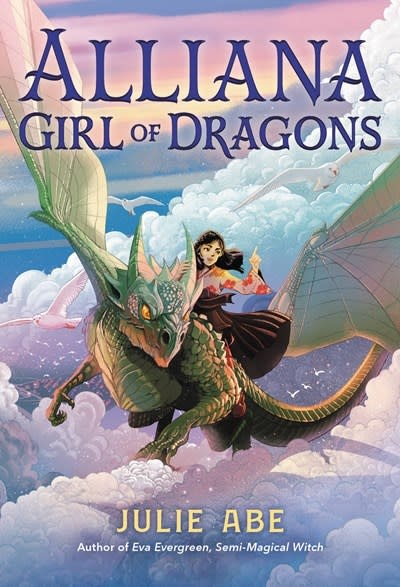 For fans of Shannon Hale and Gail Carson Levine, comes an enchanting fairy tale retelling of the Japanese Cinderella, set in the magical world of Eva Evergreen, Semi-Magical Witch.

Once upon a time, Alliana believed in dreams and fairy tales as sweet as spun-sugar clouds. Alliana wished on shooting stars, sure that someday she and her grandmother would be able to travel to the capital city to see the queen. Then her grandmother passed away—and those dreams disappeared in a disenchanted puff.

Now Alliana’s forced to attend to the whims of her wicked stepmother—with long days of cleaning her stepfamily’s inn as her skin burns raw or staying up until the crack of dawn to embroider her stepsister’s ball gowns. Until she meets two beings who change her life forever—the first is a young nightdragon who Alliana discovers she can magically talk to. And the second is Nela, a young witch.

Nela needs Alliana’s help navigating the mysterious abyss, filled with dangerous beasts, a place Alliana knows by heart. Alliana sees Nela’s request as a chance to break free of her stepmother’s shadow and to seize a chance at a life she’s barely dared to hope for—but there’s a risk. If caught, Alliana will be stuck working for her stepmother for the rest of her life. Can Alliana truly make wisps of dreams into her own, better-than-a-fairy-tale happily ever after?

Inspired by the Japanese Cinderella story and set in the same world as the Eva Evergreen series, this story can be read as a standalone.

Julie Abe has lived in Silicon Valley, spent many humid summers in Japan, and currently basks in the sunshine of Southern California with never enough books or tea, where she creates stories about magical adventures. Eva Evergreen, Semi-Magical Witch is her debut novel, of which Kirkus said in a starred review: “Bewitching… a must-read for fantasy lovers.” Julie is also the author of Eva Evergreen and the Cursed Witch and Alliana, Girl of Dragons. Visit her online at www.julieabebooks.com.