Home » Alpha: Eddie Gallagher & the War for the Soul of the Navy SEALs 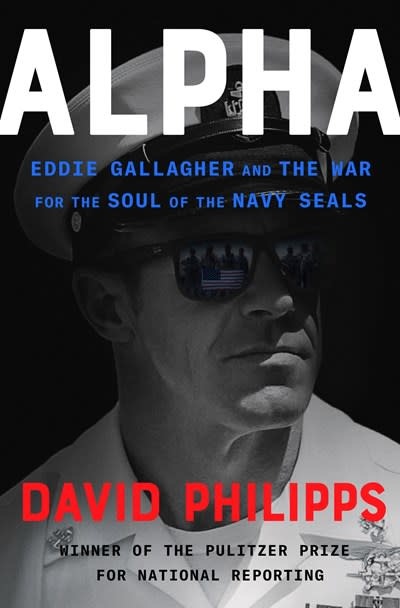 Alpha: Eddie Gallagher & the War for the Soul of the Navy SEALs

Pulitzer Prize-winning reporter David Philipps delivers an epic, page-turning account of the Navy Seals of Alpha platoon, whose deployment to Iraq led to startling accusations against their chief, Eddie Gallagher, and ignited a courtroom battle that would expose the dark underbelly of America’s most elite special forces.

By official accounts, the Navy SEALs of Alpha platoon returned as heroes after their 2017 deployment to Mosul, following a vicious, bloody, and successful campaign to drive ISIS from the city. But within the platoon a different war raged. Even as Alpha’s chief, Eddie Gallagher, was being honored by the Navy for his leadership, several of his men were preparing to report him for war crimes, alleging that he’d stabbed a prisoner in cold blood and taken lethal sniper shots at unarmed civilians.

Many young SEALs regarded Gallagher as the ideal special operations commando. Trained as a sniper, a medic, and an explosives expert, he was considered a battle-tested leader. But in the heat of combat, some in his platoon saw a darker figure—a man who appeared to be coming unhinged after multiple deployments in America’s forever wars. Their excitement to work with a tough, experienced chief soon gave way to a grim suspicion that his thirst for blood seemed to know no bounds and a belief that his unpredictability was as dangerous as the enemy.

In riveting detail, Pulitzer Prize–winning New York Times correspondent David Philipps reveals the story of a group of special operators caught in a moral crucible—should they uphold their oath and turn in their chief, or honor the SEALs’ unwritten code of silence? It is also a larger story of how the SEAL Teams drifted off course after 9/11, and of the “pirate” subculture that festered within their ranks—a secret brotherhood that, in a time of endless war ­with few clear victories, made the act of killing itself the paramount goal. The investigation and trial following Alpha’s deployment—and Gallagher’s ultimate acquittal on the most serious charges—would pit SEAL against SEAL, set the Navy brass on a collision course with President Donald Trump, and turn Gallagher into a political litmus test in a hotly polarized America.

A page-turning tale of battle, honor, and betrayal, Alpha is a remarkable exposé of the fault lines fracturing a country that has been at war for a generation and counting.

David Philipps is an award-winning national correspondent for The New York Times, where he writes about the military. He has written for the Los Angeles Times, the Chicago Tribune, and The Seattle Times, among others. His military coverage won a Pulitzer Prize for national reporting, and he was twice named a Pulitzer finalist, for local reporting and for breaking news. His coverage of the violence at Fort Carson in the Colorado Springs Gazette won the Livingston Award, and his book Lethal Warriors won honorable mention for the J. Anthony Lukas Prize.