Home » Alta California: From San Diego to San Francisco, a Journey on Foot to Rediscover the Golden State 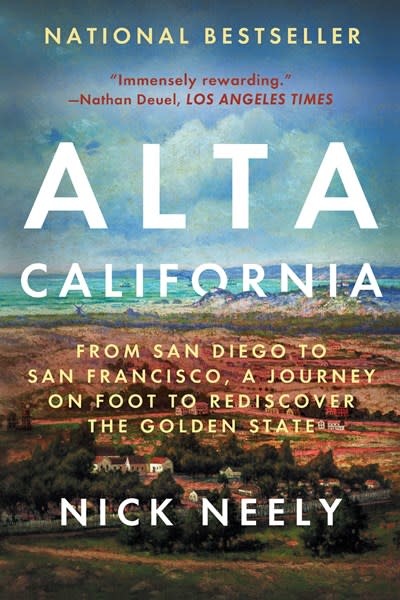 Alta California: From San Diego to San Francisco, a Journey on Foot to Rediscover the Golden State

This national bestseller chronicles one man’s 650-mile trek on foot from San Diego to San Francisco—sure to appeal to readers of naturalist works like Edward Abbey’s Desert Solitaire, Paul Thoreau’s On the Plain of Snakes, and Mark Kenyon’s That Wild Country.

In 1769, an expedition led by Gaspar de Portolá sketched a route that would become, in part, the famous El Camino Real. It laid the foundation for the Golden State we know today, a place that remains as mythical and captivating as any in the world.

Despite having grown up in California, Nick Neely realized how little he knew about its history. So he set off to learn it bodily, with just a backpack and a tent, trekking through stretches of California both lonely and urban. For twelve weeks, following the journal of expedition missionary Father Juan Crespí, Neely kept pace with the ghosts of the Portolá expedition—nearly 250 years later.

Weaving natural and human history, Alta California relives Neely’s adventure, while telling a story of Native cultures and the Spanish missions that soon devastated them, and exploring the evolution of California and its landscape. The result is a collage of historical and contemporary California, of lyricism and pedestrian serendipity, and of the biggest issues facing California today—water, agriculture, oil and gas, immigration, and development—all of it one step at a time.

“Rich in little-known history . . . Up the Santa Barbara and San Luis Obispo county coasts, then inland into the Salinas Valley to Monterey Bay. Somewhere along here, the owl moons and woodpeckers do something you might not have thought possible in 2019: they make you fall, or refall, in love with California, ungrudgingly, wildfires and insane housing prices and all . . . What a journey, you think. What a state." ―San Francisco Chronicle