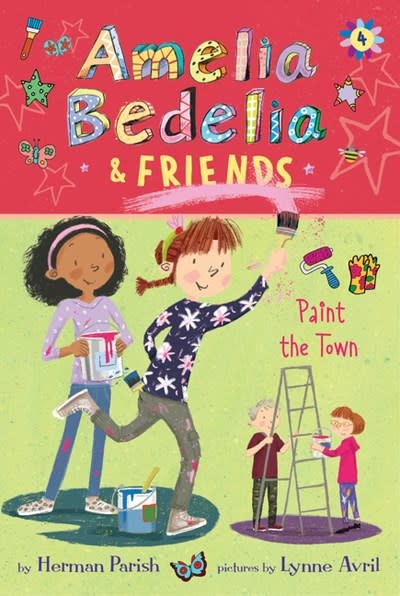 The fourth book in the Amelia Bedelia & Friends chapter book series! A New York Times bestseller, this series features friendship and wordplay and is perfect for fans of Ivy + Bean.

Amelia Bedelia and her friends are working on a school project together. Their assignment is to beautify a block downtown by painting a huge mural on an abandoned building. But with Amelia Bedelia involved, there are guaranteed to be a few funny mix-ups! The themes throughout the story include cooperation, diplomacy, community, creativity, and friendship.Illustrated in black-and-white throughout.

Herman Parish was in the fourth grade when his aunt, Peggy Parish, created Amelia Bedelia, the literal-minded housekeeper. Peggy wrote twelve books in the series before she passed away in 1988. She would be delighted that Amelia Bedelia celebrated her 50th birthday in 2013 and is still going strong.The interest of educators and the enthusiasm of young readers prompted Herman to continue the character in 1995 with his first book, Good Driving, Amelia Bedelia. Since then, Herman has added more than thirty books to the series. He has carried on her adventures as a housekeeper in books such as the best-selling Amelia Bedelia, Bookworm, and he has broken new ground in his most recent books portraying Amelia Bedelia as a young girl. She may be little, but she is as literal as ever. There are picture books for the youngest children, including the national bestsellers Amelia Bedelia’s First Day of School and Amelia Bedelia’s First Valentine. Young Amelia Bedelia also appears in I Can Read Level-1 beginning readers and a new series of chapter books, starting with the bestselling Amelia Bedelia Means Business and Amelia Bedelia Unleashed.www.ameliabedeliabooks.com Lynne Avril is the illustrator of all the books about the young Amelia Bedelia, as well as more than fifty other books for children, including Amazing You, by Dr. Gail Saltz, and If I Ran for President, by Catherine Stier. She grew up in Montana and now makes her home in Arizona. You can visit her online at www.lynneavril.com.