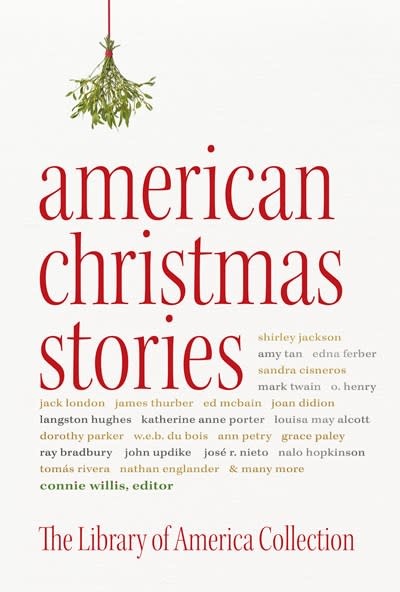 Christmas took on its modern cast in America, and over the last 150 years the most magical time of the year has inspired scores of astonishingly diverse and ingenious stories. Library of America joins with acclaimed author Connie Willis to present a unparalleled collection of American stories about Christmas, literary gems that showcase how the holiday became one of the signature aspects of our culture.

Spanning from the origins of the American tradition of holiday storytelling in the wake of the Civil War to today, this is the biggest and best anthology of American Christmas stories ever assembled. From ghost stories to the genres of crime, science fiction, fantasy, westerns, humor, and horror, stories of Christmas morning, gifts, wise men, nativities, family, commercialism, and dinners from New York to Texas to outer space, this anthology reveals the evolution of Christmas in America—as well as the surprising ways in which it has remained the same.

Connie Willis is a member of the Science Fiction Hall of Fame and a Grand Master of the Science Fiction and Fantasy Writers of America. She has received seven Nebula awards and eleven Hugo awards for her fiction; Blackout and All Clear—a novel in two parts—and Doomsday Book won both. Her other works include Crosstalk, Passage, Lincoln’s Dreams, Bellwether, Impossible Things, Remake, Uncharted Territory, To Say Nothing of the Dog, and Fire Watch. She lives in Greeley, Colorado. Her collection of Christmas stories, Miracle and Other Christmas Stories, was re-issued in an expanded edition in 2017 as A Lot Like Christmas.